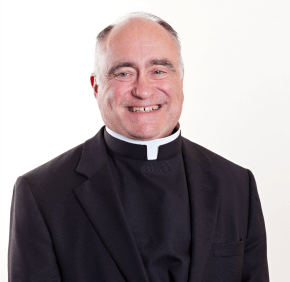 By Paul McMullen
pmcmullen@CatholicReview.org
Twitter@ReviewMcMullen
ELKRIDGE – The overflow crowd for the farewell Mass at the parish he led for nearly two decades reflected the ministry of Father H. Martin Hammond Jr.
“The people of God always came first, he always made time for anyone and everyone,” said Deacon James Westwater of St. Isaac Jogues in Carney, where Father Hammond was pastor from 1994 until October 2013. “He consistently gave his only day off to serve others, gave all the money he had in his pockets to those in need.”
Father Hammond, 67, said goodbye as pastor of St. Isaac Jogues last January as he dealt with a difficult-to-diagnose “bad virus” in his inner ear. His retirement from active ministry was made official this Nov. 1, hastened by the virus that continues to affect his balance and leave him fatigued.
His considerable energy level lifted the people of Carney and, before that, Holy Trinity in Glen Burnie, where he was pastor for nine-plus years, starting in April 1985.
“Before every Mass he would greet the people, even if he wasn’t the celebrant,” Deacon Westwater said. “He would welcome visitors and colleagues in their language: French, German, Spanish, Italian.”
An inveterate traveler whose ability to engage people extended to his piano playing, Father Hammond was born in Cumberland and raised in its Shrine of Sts. Peter and Paul. His family moved to Hagerstown, where he attended the parish school at St. Mary and then St. Maria Goretti High School, where he noted the example of Father Paul Byrnes.
“Father Paul helped at the high school, said Mass and led some programs,” Father Hammond said. “He had an influence on me. He was a real young priest. He is still a grand man, helping out at St. Peter at the Lake in Garrett County.”
Father Hammond studied at St. Charles College in Catonsville, then Mount St. Mary’s University and Seminary in Emmitsburg and the Pontifical North American College in Rome.
Ordained in July 1973, he began his priestly ministry at St. Augustine in Elkridge, where he is currently residing and helping on weekends, along with Ascension in Halethorpe. He also served St. John the Evangelist in Frederick (1975) and Immaculate Heart of Mary in Baynesville (1977-85).
While he was in Glen Burnie, Holy Trinity restored its church to the original appearance it had in 1919. In Carney, St. Isaac Jogues renovated its church and hall, but in an interview with the Catholic Review, Father Hammond spoke more about people, mentioning the volunteers behind the youth athletics program at St. Isaac Jogues, and the talents at Holy Trinity.
“The people in Glen Burnie were salt of the earth, a lot of working-class people, with a sprinkling of professionals,” he said. “Not everyone could give a lot of money, but they could build a ramp or install siding on a building.
“Everywhere I have gone, I have loved the people. … I was going to stay at St. Isaac Jogues until I retired, but then I took ill.”
He continues a rehabilitation process that he was coaxed into, fittingly perhaps, by a St. Isaac Jogues parishioner.
“Frank Rosenthal (a physical therapist) saw me shaking on the altar,” Father Hammond said. “He said, ‘I can do something about that.’ I do physical therapy every day. I can celebrate one weekend Mass. If my ears heal, I hope to do more.”
What has he most enjoyed about his ministry?
“Serving the people,” he answered. “The great thing about the priesthood is the people, in all their stations of repair and disrepair. The people are already connected to God. It’s our job to help them rediscover that connection.”
Also see:
Beyond the Bell: With school-wide support, annual musicals take John Carroll’s spotlight
NDP Scouts spread serenity among Charities’ clients
PrevNext