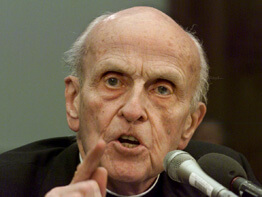 WASHINGTON – Jesuit Father Robert F. Drinan, the first Catholic priest to vote in the U.S. Congress, received praise and censure during his lifetime for his active involvement in politics.

Father Drinan, 86, died Jan. 28 at Sibley Memorial Hospital in Washington, where he had been treated for pneumonia and congestive heart failure for the past 10 days. Funeral arrangements were pending Jan. 29.

“Few have accomplished as much as Father Drinan and fewer still have done so much to make the world a better place,” said T. Alex Aleinikoff, dean of the Georgetown University Law Center, where Father Drinan had taught since 1981.

“His life was one fully devoted to the service of others – in the church, in the classroom and in Congress,” Mr. Aleinikoff added in a statement. “His passing is a terrible loss for the community, the country and the world.”

But others saw Father Drinan as less praiseworthy and his celebration of a Jan. 3 Mass at Trinity University in honor of new Speaker of the House Nancy Pelosi, a Catholic who supports legal abortion, brought new criticism.

In his Web log, or blog, for First Things magazine Jan. 19, Father Richard John Neuhaus called him “a Jesuit who, more than any other single figure, has been influential in tutoring Catholic politicians on the acceptability of rejecting the church’s teaching on the defense of innocent human life.”

Father Drinan represented Massachusetts’ 3rd District in Congress for five terms, from 1971 to 1981, but his political career effectively ended May 5, 1980, when he announced “with regret and pain” that he would not seek re-election because of an order from his Jesuit superiors.

At the press conference announcing his withdrawal from the race, Father Drinan said his goal in Congress had been “to work for justice in America and for peace throughout the world.”

But George Weigel, a senior fellow at the Ethics and Public Policy Center in Washington and a syndicated columnist, told Catholic News Service Jan. 29 that Father Drinan’s reputation as a fighter for human rights was tainted by the fact that he was “on the wrong side” of the abortion issue and played “a pivotal role in the transition of the Democratic Party” from a pro-life party to one that ardently supported keeping abortion legal.

That role “cannot be ignored in assessing his record in general or the claims made about him as a great advocate of human rights,” Mr. Weigel said.

Sen. John F. Kerry, the Massachusetts Democrat who ran for president in 2004, told The Boston Globe that Father Drinan “lived out in public life the whole cloth of Catholic teaching.”

Sen. Kerry, who served as the priest’s campaign manager during his first election run in 1970, called him “a forever gentle, resilient, tenacious advocate for social justice and fundamental decency.”

Born Nov. 15, 1920, in Boston, Robert Frederick Drinan graduated from Hyde Park High School in 1938 and received both bachelor’s and master’s degrees from Boston College in 1942, the same year he entered the Jesuits.

After receiving bachelor of laws and master of laws degrees from Georgetown University Law Center, he was admitted to the District of Columbia bar in 1950 and ordained a Jesuit priest in 1953.

Father Drinan was dean and professor of law at Boston College Law School from 1956 to 1970, specializing in criminal law, constitutional law, family law, philosophy of law and church-state relations.

His election to Congress in 1970 made him the first priest allowed to vote in the House of Representatives. Norbertine Father Robert J. Cornell followed him, representing Wisconsin’s 8th District as a Democrat for two terms, from 1974 to 1978.

Father Cornell had been seeking to regain his seat in the 1980 election but withdrew from the race the day after Father Drinan did.

Father Gabriel Richard was a nonvoting delegate from the Michigan Territory from 1823 to 1825 and is credited with convincing Congress to fund the road from Detroit to Chicago, now known as Michigan Avenue.

Among Father Drinan’s most historic moments in Congress was his July 31, 1973, introduction of the first formal resolution to impeach President Richard M. Nixon. “The time has arrived when the members of the House must seek to think the unthinkable,” he said from the House floor.

He was a strong opponent of the Vietnam War and in a 1974 speech to the American Academy of Religion criticized the churches of the United States for failing to speak out on such political issues as the threat of genocide from nuclear weapons and the danger of worldwide famine.

“Where are the voices of the churches on the principles and policies that the United States is following and not following?” he asked.

Father Drinan spoke of some of his proudest accomplishments at the press conference announcing his withdrawal.

“For a decade I have had a voice and a vote in the resolution of the most difficult problems confronting this country and this world,” he said. “I worked for the termination of the war in Vietnam. I helped eliminate the military draft. I was a leader in the abolition of mandatory retirement based on age. … I am grateful to have had these opportunities to be a moral architect.

“I can think of no other activities more worthy of the involvement of a priest and a Jesuit,” he said.

Georgetown estimated that Father Drinan taught some 6,000 students during his 26 years there. At the time of his death he was teaching a class on religion and government and an advanced seminar on legal ethics.