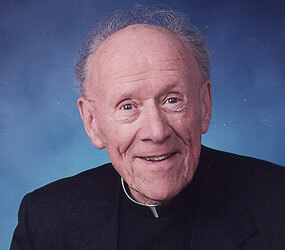 Father David W. Shaum, a legendary figure at Mount St. Mary’s in Emmitsburg and the second longest-serving priest of the Archdiocese of Baltimore, died Oct. 6 just two weeks before his 91st birthday.

Father Shaum taught music, logic, history and philosophy at the college and seminary from the early 1950s until his retirement in 1995. He continued to live on campus for many years after his retirement and was still hearing confessions from seminarians in recent years.

An accomplished musician, the Taneytown native founded the Glee Club at Mount St. Mary’s and was well known for Christmas candlelight concerts. His students performed internationally, making an appearance at a papal audience in St. Peter’s Basilica before Pope John Paul II and a crowd of 6,000 in 1990. They also sang a liturgy at the Shrine of St. Francis of Assisi in Italy.

“I respected that our alumni said he was a very demanding teacher,” said Dr. Thomas Powell, president of Mount St. Mary’s University. “They said he was a tough mark – but then they would pause and add that it made them better.”

Powell noted that Father Shaum was the last of two priests who had served on the university’s council before it had a lay board. He served as secretary of the College Council, treasurer of the college, academic dean, chair of the fine arts department and chair of the education department.

“He was a great wealth of knowledge about the history of the Mount,” the president said. “He was a humble man. He didn’t like to brag.”

Father Shaum graduated from Taneytown High School in 1938 and from Mount St. Mary’s College in 1942. He prepared for the priesthood at the Mount and was ordained on June 29, 1946, at the Basilica of the National Shrine of the Assumption of the Blessed Virgin Mary in Baltimore.

After he moved into St. Catherine’s Nursing Center in Emmitsburg, Father Shaum taught music to the residents and developed a choir. He had long assisted at area parishes, especially the Shrine of St. Anthony in Emmitsburg.

Before his assignment to Mount St. Mary’s, Father Shaum was associate pastor of St. Vincent de Paul in Baltimore, St. Martin in Baltimore and St. John in Westminster.

In a 2001 interview with The Catholic Review, Father Shaum expressed joy for the gift of the priesthood.

“I’m grateful for all the opportunities and the years that Christ the high priest has given me,” he said.

Father Shaum’s 11 a.m. funeral Mass will be offered Oct. 12 at the Mount’s Chapel of the Immaculate Conception