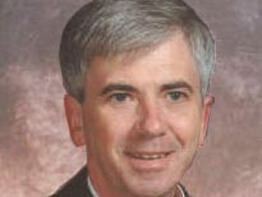 In Father Patrick Carrion’s family, the religious life was always viewed as a genuine vocation. Growing up, he saw examples of religious life from his uncle, a priest, and his great aunt, a sister. Later, his older brother, Michael, would also become a priest.

“We saw the priesthood and religious life as something familiar and good to do,” said Father Carrion, interim administrator of St. Ignatius in Ijamsville. “We didn’t see it as something foreign. It was always an equally positive option for us.”

As Father Carrion celebrates the 25th anniversary of his priestly ordination, he said he has enjoyed ministering to people in a variety of situations.

“Since we represent the church, people don’t see us as strangers,” said Father Carrion, who grew up in St. Louis parish in Clarksville and attended Cardinal Gibbons School in Baltimore.

“They welcome us into their lives in the most intimate moments – at baptism, marriage and death,” he said.

Father Carrion remembered that his first baptism as a priest was of a man in his 70s and his first funeral was for a 2-year-old child.

“That said to me that things don’t always happen in the order we think,” he said. “Our job is to bring holy order to that.”

For those considering the religious life, Father Carrion encouraged young people to “listen to your heart.”

“Listen to cues that people give,” he said. “Sometimes people see within us the ability to do something we ourselves don’t see.”

After completing his studies at St. Mary’s Seminary in Roland Park, Father Carrion served as an associate pastor of Our Lady of Victory, Arbutus; St. Charles Borromeo, Pikesville and St. John the Evangelist, Columbia.

From 1995-1998, he served as interim parish administrator at several parishes. He was the associate director and then the director of the archdiocesan division of clergy personnel.

Father Carrion was also the interim administrator of St. John, Westminster and has served as the director of deacon formation.