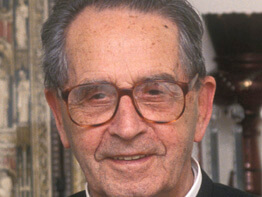 CHESTNUT HILL, Mass. – Father Raphael Caamano, a Spaniard who was the U.S. head of the Opus Dei personal prelature from 1980 until 1988, died May 21 of cancer at his home in Chestnut Hill. He was 82.

A funeral Mass was celebrated May 23 at St. Lawrence Church in Brookline. Father Caamano was buried in St. Joseph Cemetery in West Roxbury.

Father Caamano was born in Ferrol, Spain, Nov. 14, 1924. While serving in the Spanish navy, he was responsible for designing ships, inspecting the construction of seagoing vessels and commanding ships in fleet exercises. He also spent time in Newcastle, England, learning construction techniques for new warships.

In 1949, Raphael Caamano joined Opus Dei. He continued serving in the Spanish navy until 1961, when he retired with the rank of commanding officer, to devote his energies full time to developing the work of Opus Dei.

In 1992, Father Caamano moved to the Boston area where he carried out his pastoral work for his last 15 years, preaching many retreats at Arnold Hall Conference Center in Pembroke, offering spiritual direction to laypeople and priests, and providing pastoral attention to the Opus Dei centers in the Boston area.