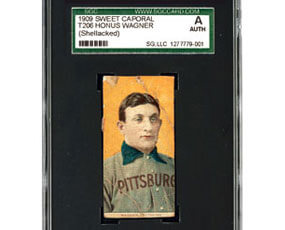 An incredibly rare T206 Honus Wagner baseball card, one of the most valuable pieces of sports memorabilia in the world, brought an unexpected blessing to the School Sisters of Notre Dame based in Baltimore Nov. 4, when it sold to an unspecified bidder for $262,900 at Heritage Auctions in Dallas.

According to a news release issued by the auction house, the price includes a 19.5 percent buyer’s premium.

The card, graded authentic though in poor condition, was left to the School Sisters of Notre Dame’s Atlantic-Midwest Province by the blood relative of one of the sisters, who died in 1999.

Her brother, who died earlier this year, left everything he had to the congregation, including the card, which beat initial estimates of its auction price by $162,900. The School Sisters of Notre Dame, an international congregation, will realize $220,000from the auction. They intend to use the money to fund their charitable work.

“We’re very grateful to have the extra funds to help the School Sisters of Notre Dame where we minister in more than 30 countries,” said Sister Virginia Muller, treasurer for the Atlantic-Midwest Province, in a news release.

“We may not have known who Honus Wagner was before this,” she added, but his name is blessed to us now, and we’re thankful for the outpouring of support that we’ve seen from people across the nation since the story broke. Now we’re ready to go back to doing our work.”

According to the news release, the winner of the card is Doug Walton, managing partner of Walton Sports & Collectibles LLC.

“For many years I have been in the hunt for an original T206 Wagner in any condition and the back story on this card makes it that much more special,” Walton said. “We will proudly display this card throughout our seven card shops in Tennessee, South Carolina and Florida in the coming months.”

According the news release, only about 50 of the T206 Wagner cards are known, with this one being new to the census of known examples. This card was in the collection of the donor since 1936, and caused a major stir in the sports collectibles hobby when its existence was revealed earlier this summer.