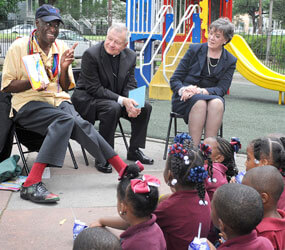 NEW ORLEANS – Wearing painted shoes and a shirt emblazoned with the slogan “Be Positive, Regardless,” Wally Amos gave a dramatic reading of the Dr. Seuss classic “Green Eggs and Ham,” demonstrating to a preschool-age audience that reading is far from dull.

The April 27 reading in front of 85 students at the Louise Head Start Center in New Orleans marked the first major public event in advance of the September 2011 launch of Amos’ Read it LOUD! Foundation. Amos, the founder of the “Famous Amos” cookies, hopes to use his foundation to get 5 million American parents to commit to reading aloud to their children at least 10 minutes every day.

“I think the best way to get rid of the problem of adult illiteracy is to create generations of children who can read,” said Amos, who was in New Orleans to take his simple, read-aloud message to more than 7,000 teachers and administrators attending the National Catholic Educational Association convention. “If we do that, then automatically the problem of adult illiteracy goes away. We build strong children. We build a strong society. We build stronger families. We build a stronger world,” he said.

Born in Tallahassee, Fla., and raised in New York City, Amos witnessed firsthand how easily the problem of adult illiteracy passes under the radar in American society. Although he learned to read from an early age at his segregated Tallahassee elementary school, Amos did not know that his own parents could not read until he began volunteering in adult literacy programs as a young adult.

Amos, whose foundation is partnering with the Library of Congress and the American Library Association, said participating in the NCEA’s convention was “a great opportunity” to introduce his reading aloud push to thousands of teachers. NCEA’s goal is to get 1 million families from Catholic schools and parishes to sign up for Read it LOUD! Before the official kickoff.

“This is such a simple idea, and it’s such a big idea,” Amos said. “Everybody talks about ‘nonpartisan.’ Well, reading out loud to children is nonpartisan. It doesn’t matter if you’re Republican, Democrat, Socialist, Tea Party, Ice Cream Party or Cookie Party. I don’t care what party you belong to. If you’ve got children, read to them. If you don’t have children, then go find them and read to them, because it’s going to enrich your life.”

In anticipation of the reading initiative’s fall launch, Amos’ foundation, in cooperation with the NCEA, collected more than 100 boxes of new and slightly used children’s books to distribute to the Archdiocese of New Orleans’ five Head Start centers. Parents of students enrolled in Head Start are already required to read to their children at home at least 20 hours each month as part of their participation agreement.

“There are millions of books that give children great ideas that will stir their imaginations, that will help them build confidence and that will entertain them,” Amos said before the Head Start event.

“The big idea in this book is that we’re all special,” Amos said. “Each one of you guys is so special. Everybody loves you because you are special. God made you special.”