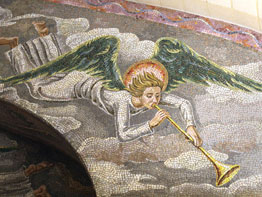 HUNTINGTON, N.Y. – While multitudes of people see the art of muralist Hildreth Meiere at New York’s Radio City Music Hall and the National Academy of Sciences in Washington, a limited audience also gets to see her work up close at St. Mary’s High School in Manhasset and at Immaculate Conception Seminary in Huntington.

Monsignor James Swiader, dean of seminarians in Huntington, said he has often admired the mosaic “The Eternal Christ Enthroned in Judgment” in the bishops’ chapel at the seminary, but he said he never realized the scope of the artist’s work until her family members recently visited the seminary to photograph the mosaic.

“It was amazing to me to see the mosaic, which is unlike any other work of hers that I have seen,” said Hildreth “Hilly” Meiere Dunn, the artist’s granddaughter, who photographed the chapel.

Hildreth Meiere was a 20th-century artist whose work included Byzantine mosaics, art deco medallions and bas-reliefs; she died in 1961. The seminary mosaic, commissioned in 1943, is set in the chapel adjoining the crypt, where bishops of Rockville Centre and Brooklyn are buried. It depicts Jesus seated on the throne of earth on Judgment Day.

Jesus holds a book that reads “Ego Sum Resurrectio et Vita,” Latin for “I am the resurrection and the life.” A miter, a broken crosier, a shattered cathedral and skeletal bones are on the ground signifying God’s direct governance of the church for eternity.

Monsignor Swiader, who gave a tour of the chapel to Hilly Dunn and Louise Dunn, the artist’s great-granddaughter, said he hadn’t realized that the artist who did the chapel mosaic also had works on display at Rockefeller Center and Radio City Music Hall.

Meiere’s works can be seen in other New York locations including the Bank of New York in Manhattan, St. Bartholomew’s Episcopal Church and Temple Emanu-El. She also designed two altars at Fordham University in the Bronx.

Among her other designs are the dome at the National Academy of Sciences in Washington, much of the Nebraska state capitol building, and many facets of St. Louis Cathedral in St. Louis. Her works also appeared at three different world’s fairs.

While Hilly Dunn and her niece examined the mosaic at the seminary, Monsignor Swiader told them that there was too much detail to see in one visit. “You have to keep coming back,” he told them.

Hilly Dunn said her family has established the International Hildreth Meiere Association to promote and preserve the artist’s legacy. Last year the family had an exhibit of designs of some of her paintings and other works at the family home in Connecticut.

The association also has a Web site, www.hildrethmeiere.com. Louise Meiere Dunn, the artist’s daughter, is president of the association. A major exhibit of Meiere’s work is planned for St. Bonaventure University in Olean, N.Y., in the fall of 2009.