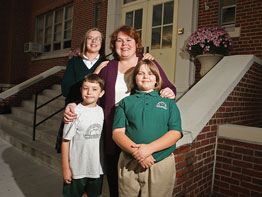 Karen Hilseberg drives a 12-year-old Chevy Caprice with a dent in the back. She couldn’t afford a house, so she lives with her three children in one her mother owns. She and her kids forego brand-name clothes, the latest gadgets and, most years, a summer vacation.

To her kids, Ms. Hilseberg is a hero because she does what it takes so they can attend Catholic school – and teaches them to do the same.

Ms. Hilseberg, 43, said she’s following the example of her parents, who struggled to put her and her two sisters through Catholic schools.

She sends her two daughters and her son to Mother Mary Lange Catholic School in Gardenville. The school teaches her children – Sara, 12, Rebecca, 9, and Stephen, 6 – about God, hard work and discipline, and respecting others.

“I could not imagine my kids going anywhere else for school,” Ms. Hilseberg said. “I know that the things I expect out of my kids at home – to be polite, to have manners, to do what’s right – I know all that is being reinforced where they are, and I know that they’re getting a really good education.”

Ms. Hilseberg, who works in the office of a property management company, said she spends one paycheck a month on tuition and the school’s after-care, which the children attend until about 5:30. Her two older children spend much of the after-care time doing up to two hours of daily homework.

“I hear people in my school talking about, ‘Oh, when I get home, I’m going to play my Xbox 360, then I’m going to play the PlayStation 3,” said Sara, whose mother can afford neither. “And I think: why do they waste their time playing video games when they could be reading a book?”

Sara, an eighth-grade honor student, plans to attend Mercy High School, The Catholic High School of Baltimore or the Institute of Notre Dame next fall.

Ms. Hilseberg’s kids know better than to ask for hip jewelry or designer clothes. And at the grocery store, the family buys mostly what’s on sale or food for which Ms. Hilseberg has a coupon.

Sara and her sister, Rebecca, had attended St. Dominic, Hamilton, before it merged in 2005 with the parish schools of The Shrine of the Little Flower, Northeast Baltimore, and St. Anthony of Padua, Gardenville, to become Mother Mary Lange Catholic School. Mother Lange occupies the former St. Anthony school building.

Ms. Hilseberg, who is divorced, and her children live in her childhood home, near St. Matthew, Northwood. The children spend weekends with their father, John Johnson, and attend Mass with him at The Church of the Nativity, Timonium.

Sister Rita Michelle Proctor, O.S.P., principal at Mother Mary Lange, said other parents at the school make sacrifices to send their children there. Some even must decide whether to buy food or gas, or pay tuition.

“Something good’s happening here,” Sister Rita Michelle said, “that makes them want to make that sacrifice.”

Ms. Hilseberg – and her children – would agree.