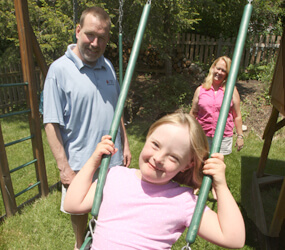 As far as 9-year-old girls go, Ellen Scheel is ‘typical.’ She loves her family, hanging out with friends, belting out Hannah Montana tunes and riding horses.

She plays Monopoly with her mother, Kelly, in the middle of the family’s Timonium living room floor. She is the apple of father Jamie’s eye and reads books to him.

None of this has come without struggle.

“The day she was born, I said to my husband, ‘I think she has Down syndrome,’ ” Kelly remembered.

When doctors confirmed that Ellen did have Down syndrome, the Scheels decided limitations weren’t going to be placed on their daughter.

Ellen didn’t start walking until she was 3, an age when many children start preschool. She discovered how to run quickly.

“She’s very high functioning,” said Kelly, 45. “My goal for her is to get a job, get married if she chooses to and support me when I’m old and gray.”

The Cathedral of Mary Our Queen, Homeland, parishioners have found not everyone is ready for people with disabilities.

Ellen became the first student with Down syndrome in the Cathedral’s school of religious education and the first at Timonium Elementary School, where she is a third-grader.

Her school, Kelly said, originally said it did not have a place for Ellen.

“I didn’t expect it to be this hard,” Kelly confessed. “For the most part we are still fighting. I don’t want anyone else to have a hard time.”

Kelly was battle-tested before Ellen.

During the 1990s, Kelly was in a relationship and gave birth to a son named Christopher, who doctors at The Johns Hopkins Hospital in Baltimore discovered had spinal meningitis.

He was blind, and he had cerebral palsy and many complications from pressure to his brain.

Christopher lived at a local pediatric hospital and could leave with Kelly for just 48 hours.

“He loved going to church,” Kelly said. “He couldn’t say a word, but he would sing with the choir.”

A year after Christopher’s birth, Kelly had another son with no medical issues and gave him up for adoption.

“I always joke that God only gives me a child with a disability because he doesn’t think I can handle a ‘typical’ child,” she said. “The one ‘typical’ one was meant to be given to someone else.”

Christopher died at the age of 5.

“That is what made me what I am today,” Kelly said. “For me, he was kind of like the guidance to give me the voice for Ellen.”

She married Jamie 13 years ago. Jamie is reserved, but loves his family deeply. He leads one of the biggest teams entered in the annual Polar Bear Plunge at Sandy Point State Park. The money from the event goes to Special Olympics Maryland.

Co-workers and friends from the plumbers and steamfitters local union 486 participated and raised $85,000. Jamie teaches at the union’s school.

“I knew I had to do something,” Jamie said.

Ellen loves a photo from this past January’s event.

Ellen will participate in horse riding during the Summer Games of the Maryland Special Olympics June 5-7.

When Ellen read to a recent visitor, she told her parents to “zip it!” Her parents laughed hysterically.

“That’s your side coming out,” Kelly said to her husband.

“That’s you,” Jamie teased back.

The Archdiocese of Baltimore is trying to perfect outreach to families like the Scheels. Auxiliary Bishop Mitchell T. Rozanski recently met with pastors, directors of religious education, youth ministers and persons from the deaf and disabled communities to formulate a plan to assist parishes in welcoming those with disabilities.

Kelly participated in the group.

“I think we have made great strides in incorporating people with disabilities into the life of the parish thanks to the courageous witness of people themselves and their family members,” Bishop Rozanski said.

Bill Fleming, the archdiocese’s coordinator of catechesis for persons with developmental disabilities, said many parishes are unsure how to reach out to families.

“We’re trying to break down barriers,” he said.

Fleming said Kelly had influential ideas for the archdiocese’s annual Family Fun Day, hosted at the Monsignor O’Dwyer Retreat House in Sparks for people with disabilities.

“People like Kelly are crucial,” Fleming said. “Just to see her faith is so wonderful. What a model of parenting.”

“People with disabilities bring such an enthusiasm and love of the church and the sacraments,” Bishop Rozanski said. “They also bring it to fellow students to heighten their own awareness and their ability to reach out.”

Kelly and Jamie Scheel know their daughter is a gift.

“Ellen,” Kelly said, “is going to teach people how to love who never knew the true meaning of it.”