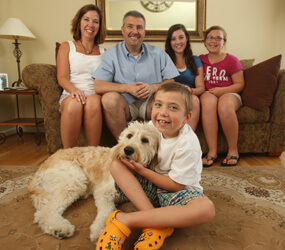 When Michele Catterton’s 8-year-old-son, Bradley, was lying in a Johns Hopkins Hospital bed this spring, the mother of three went every night to the chapel to pray.

“I just prayed that God would give us a heart for Easter,” said Michele Catterton, whose son was born with two heart conditions, Long QT and Bradycardia.

Her husband, Chris, visited “Christus Consolator,” a well-known statue at the Baltimore City hospital, which, ever since it was erected in 1896, has been a source of inspiration, hope and consolation for many patients, doctors, students and visitors of all faiths.

“I went to the statue every day on my way in and out and brought flowers and notes,” he said.

The family’s parish, St. Ignatius in Hickory, and countless others who heard about Bradley also prayed for the Cattertons.

Bradley was diagnosed with heart conditions when he was born, but had been asymptomatic for seven years. Then a yearly check-up indicated tachycardia, which is a rapid heart rate, and a biopsy showed a virus in the heart. Bradley, who enjoys building model cars, playing with friends and swimming, showed signs of improvement after taking medication, but then passed out on the school playground. An echocardiogram March 20 led to Bradley’s being admitted to the pediatric intensive care unit at Johns Hopkins, where he received a pacemaker.

By March 30, the second-grader at Forest Hill Elementary School was on the heart transplant list.

It was a challenging time for the Catterton family, including Bradley’s sisters, Caroline, 14, who attends The John Carroll School, and Abby, 12, who goes to St. John School in Hydes. But prayer prevailed, and in the end came a ‘miracle.’

After all their prayers, the Cattertons learned at 11:15 p.m. on April 10, Good Friday, that a matching heart had been found for Bradley.

“That right there to me is an absolute miracle,” Michele said.

The Cattertons relied on their faith while their son was in the hospital, but it wasn’t always easy.

After receiving a pacemaker, but before being put on the transplant list, Bradley had a traumatic moment in the hospital, and was saved by a defibrillator and CPR. After that “horrible day,” Michele Catterton said she asked the question, “What have I done to deserve this kind of thing?”

“But I think it’s made my faith better,” she said. “It really has. I always believed. I think it just made me more of a believer because that’s all I prayed for was an Easter heart. And what did we get?”

Her husband said they struggled with what it meant to pray for a new heart for Bradley, knowing it would come at the cost of someone else’s life.

He said he spoke with Father Paul Sparklin, the Catholic chaplain for Johns Hopkins, who told him that “the world’s a big place and these things happen every day.”

“Walking the halls of Hopkins is very humbling, because when one child steps down to another room, there is always another child who comes in,” said Chris Catterton. “Just the staff there are miracle workers in themselves.”

Michele, 42, teared up as she spoke about how she prayed to God that she would be a better person if God “would do this for me.”

Through it all, the Cattertons, both organ donors, were amazed at the number of people praying for them.

Bradley had a stroke during transplant surgery and will be on medication for the rest of his life, but he is doing well, going to the beach and playing with his dog, a 2-year-old goldendoodle named Jack. Like a typical 8-year-old boy, he already has bruises and cuts from being outdoors playing with friends. His blue eyes light up when he talks about the laptop he received for his birthday while he was in the hospital.

His mother, who teaches at Harford Community College, said Bradley knows God gave him a heart, but he “doesn’t have a clue about the magnitude of it all.”

The Cattertons are grateful to all who prayed for them, including their pastor, Father James Barker, who visited Bradley in the hospital. Michele maintained a blog on the site, CaringBridge, which has had more than 12,000 visitors.

As far as lessons learned, Chris Catterton said – “God doesn’t give you more than you can handle,” “every day is a gift,” and “it teaches you not to sweat the small stuff.”