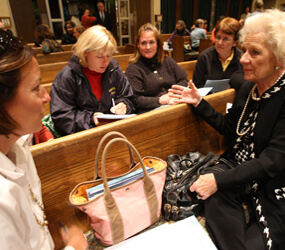 The mother of five school-age children has heard about declining enrollment throughout the Archdiocese of Baltimore. She knows parents are trying to keep up with rising tuition costs in the midst of an unstable economy and poor job market.

“The most important thing that I want to pass on to my children is my faith,” Myers said, “and I don’t know how I can do that without Catholic schools.”

Myers was able, along with 124 other interested people, to voice her passion for Catholic schools Oct. 1 at a listening session held at Church of the Resurrection in Ellicott City.

Conducted by Monsignor Robert L. Hartnett, executive director for schools planning in the Archdiocese of Baltimore, the two-hour session was one of several held in recent weeks at schools and churches.

The sessions are being recorded and submitted to a blue ribbon committee formed by Archbishop Edwin F. O’Brien, with the assistance of Monsignor Hartnett and chairman Frank L. Bramble. The panel is developing a strategic plan for the future of Catholic schools.

The group of business, educational and political leaders was appointed in February. The archbishop reiterated Oct. 1 that he expects their recommendations by June 2010.

The Resurrection listening session broke into small groups where people were asked why they were involved with Catholic schools, their expectations of the institutions and their recommendations for the planning process. People were asked to say what the committee most needed to be attentive to and what should not be overlooked or lost in the process.

“It’s our hope to listen to concerns, particularly of parents and teachers,” Monsignor Hartnett told those in attendance.

The pressure is on, as Monsignor Hartnett said, “Just in our last year, there was a seven percent drop in school enrollment.”

Many schools, he added, are facing major financial issues.

“We are in a critical situation,” he added. “I don’t think anyone underestimates that.”

Monsignor Hartnett said the committee has studied “about 17 or 18 plans” from other dioceses.

Some parents felt they could be of more assistance if they knew what plan the blue ribbon committee is favoring.

“I don’t even know what we’re planning,” Myers said. “What is the goal of the meeting? We just turned out to support the school. Is there a danger more schools are going to be closed?”

Archbishop O’Brien spent most of the evening listening to the thoughts and suggestions of parents and teachers.

“We’re doing everything we can to be as thorough as we can, and we have a wonderful staff working on it,” he told them. “It’s one of the more impressive processes I’ve come across.”

Afterward, the archbishop told The Catholic Review: “I think there are really going to be some major changes, and we have to get people ready for that without panicking them. There’s a lot of good going on and we don’t want to disturb that. We all have a responsibility, not just for our own parish, but everywhere.”

Monsignor Hartnett, pastor of Our Lady of Mount Carmel in Essex, said the issue is deeply personal for him, as his parish has both an elementary and high school.

Myers, a former Catholic school teacher, said there is real value in attending the listening sessions and will speak to friends about going to other gatherings.

“I would tell them if they want to see Catholic schools continue, they should come in abundance,” Myers said. “I feel like it energized those of us who are committed to it. I learned a lot that I didn’t know.”

Go to www.archbalt.org/blueribboncommittee/ to submit recommendations about the future of schools.