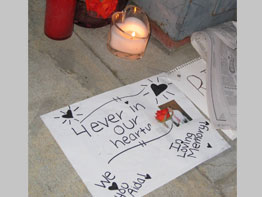 LOS ANGELES – Two were young graduates of Moorpark High in suburban Los Angeles, symbols of pride in their families, and both attended college with ambitious dreams –- social work for one, fashion design for the other.

The other was a former Marine from Santa Paula who taught yoga to the blind and who was described by family members as a “wonderful, giving person.”

In one horrible moment, all three, and 22 others, were gone, victims of a Sept. 12 train collision near Chatsworth. Another 135 people were injured in the crash. On Sept. 16 officials confirmed a 26th person died from injuries sustained in the accident.

Aida Magdaleno of Camarillo, 19, Maria Elena Villalobos of Moorpark, 18, and Manuel Macias Jr. of Santa Paula, 31, were among the passengers who died when a northbound Metrolink commuter train collided with a southbound Union Pacific freight train on the tracks north of the Chatsworth Metrolink station before 4:30 p.m. The Metrolink engineer, who reportedly missed a warning signal, was also killed.

The two young college students were both parishioners of Holy Cross Church in Moorpark. Ms. Magdaleno attended California State University at Northridge, while Ms. Villalobos was enrolled at the Fashion Institute of Design and Merchandising in downtown Los Angeles.

The Macias family attends St. Sebastian Church in Santa Paula, where Manuel had been baptized and made his first Communion.

As the death toll mounted Sept. 12, some of the most heart-wrenching scenes were of the waiting endured by Magdaleno and Villalobos family members as they desperately sought news of what had happened to Aida and Maria Elena. On Sept. 13, their worst fears were realized: Both had been confirmed dead.

“I knew both young women, and their families are very active in the parish,” he told The Tidings, newspaper of the Los Angeles Archdiocese. “This has hit us all quite hard.”

“We prayed, we talked,” he noted. “These are wonderful people with great faith. … And our parishioners have been great about stepping up and wanting to help in any way they can.”

Manuel Macias had become a certified yoga teacher and worked with students at the Braille Institute in Los Angeles, as well as senior citizens in Santa Paula, said his aunt, Linda Dominguez.

Just a couple miles from the Chatsworth crash site is St. John Eudes Church, where at 5 p.m. Sept. 12 Father Kenneth Chukwu, a priest in residence from Okigwe, Nigeria, was just getting home after his duties as priest-chaplain at Northridge Hospital.

Upon hearing of the train accident, and knowing many injured would be sent to Northridge, he went back to work and spent much of last weekend offering comfort to the injured and their families.

“There were several who offered thanks to God for sparing their lives,” Father Chukwu noted. “One injured man, who was Jewish, told me that he felt very lucky to have been saved from death. ‘It’s made me more aware that death could come at any time,’ he said. ‘I know now that we should live every day as if it is our last.’“

As is often the case in such tragedies, there were people who asked Father Chukwu why God could allow such an event to take place.

“It is not easy to answer,” he admitted. “We only know that there are situations over which we have no control, that God gives us free will to make choices. But we also know that God will love us always.”