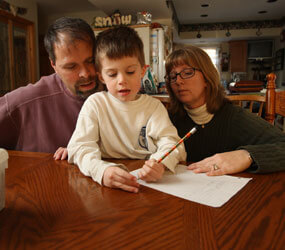 As infants, Donald and Jack Hemling were developmentally delayed. By the time the boys were 15 months old, their parents – Caroline and Henry – had them tested. They were six months behind where they should have been.

The family noticed Donald was different. When he was 4, Donald slapped his hands when he was excited and would, occasionally, angrily bang his head on the floor and wall.

“Don just wasn’t progressing as much as his brother,” said Caroline, the director of religious education at Our Lady of Mount Carmel in Essex.

Caroline said: “I just kept saying to my husband, ‘there’s something here that I can’t put my hands on.’”

She said many children throw a fit when they don’t get what they want.

“Jack has that switch that says, ‘OK, they mean business. It’s time to turn it off and move on,’” Caroline said. “Don did just not have that switch. I kept saying, ‘he doesn’t know.’ ”

A psychologist performed tests on Donald, finding the boy had ADHD and was mildly autistic.

Caroline felt relief at the news of Donald’s autism, saying: “This is who he is, how do I work with it? God makes us all differently and if this is how (Donald) is made and wired, then OK, I’m fine with that God. I just need to know how to work with it because his success is the biggest thing for him.”

The Autism Society of America Web site defines autism as “a complex developmental disability that typically appears during the first two years of life and is the result of a neurological disorder that affects the functioning of the brain, impacting development in the areas of social interaction and communication skills.”

The Center for Disease Control estimates “between 1 in 100 and 1 in 300 with an average of 1 in 150 children in the United States have” a form of autism.

As many as 1.5 million people have some autism, and the number is rising.

The Autism Society states: “There is no known single cause for autism, but it is generally accepted that it is caused by abnormalities in brain structure or function. Brain scans show differences in the shape and structure of the brain in children with autism versus neuro-typical children.”

The Archdiocese of Baltimore is trying to catch up with rising diagnoses, according to its coordinator of catechesis for persons with developmental disabilities, Bill Fleming.

“I don’t think the church is any different than society,” Fleming said. “We all have to grow in our understanding.”

There were times when Donald would ball himself up on a pew or bark like a dog.

Recently, Donald repeatedly asked Caroline if he could stay home from Mass, but cried when Caroline left. Later that day, Henry walked into church with Donald, and suddenly the Hemlings were together.

“To have all four of my children together so that we can pray together as a family, it really means a lot,” Caroline said.

Throughout Mass, Donald held a video game controller, even in the line for the Holy Eucharist.

“I’m looking at some parishioners, and they’re surprised,” Caroline said. “I wanted to say, ‘If you only knew what we go through before we get to church.”

Fleming said he wants to form an advisory committee to discuss autism and other special needs in the archdiocese.

“What we’re trying to do is get the message out to parishes to be more welcoming and inclusive,” he said.

Donald is in the religious education program at Mount Carmel and thriving, Caroline said.

When Donald wants something, he mumbles and he has trouble with beginning and ending consonants.
“We’re still working on that,” Caroline said, adding that the family stresses eye contact when he talks.

There have been major strides in Donald’s life. He attends Orems Elementary School in Middle River-Essex and receives special attention. Caroline and Henry read to him at home, reinforcing his education.

Some who are autistic might have trouble with affection.

“Unlike a lot of autistic children, Don is very loving,” Caroline said. “He’s a charmer. He has a smile that could melt your heart.”

Caroline said Mount Carmel staff members have been supportive and helpful with her children.

Still, even at 6, Donald “will pitch royal fits,” according to his mother.

On a snowy November day this year, the Hemlings went to get flu shots. Donald fixated on wanting the sun to come out.

“With children with special needs… you have to be extremely patient,” Caroline said.

Doctors haven’t given an indication where Donald is ultimately heading developmentally.

Caroline said a life with Donald is worth cherishing. Many nights, he stays up to be with his parents under a blanket.

“He just wants to love,” Caroline said. “That’s that mommy and Don time.”