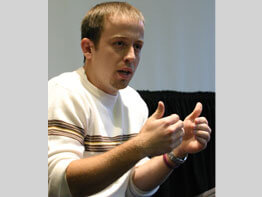 ATLANTA – As the second anniversary of the largest mass killing on a U.S. campus approaches, the Catholic priest serving at Virginia Tech University said the church can help fearful and confused students through its mindfulness of community rituals.

The church view of the “intimacy of God with the world” is a strong perspective during times of crisis, Father John Grace said. “It is probably the strongest card we have.”

More than 30 members of the National Association of Diocesan Directors of Campus Ministry, meeting in Atlanta Jan. 5-6, discussed how to support a faith community when students at a university are reeling from a crisis.

Father Grace, a priest of the Diocese of Richmond, Va., and graduate student Jeff Yacup talked about the Virginia Tech shootings that took the lives of 32 students and faculty members on April 16, 2007; the shooter, a student, then took his own life.

The priest wore his burgundy Virginia Tech polo shirt and Yacup had a “We are all Hokies” wristband, an expression of solidarity that linked Virginia Tech and all those hurting for them worldwide.

When the shootings occurred, Father Grace, not yet assigned to the campus, had just ended a 16-year stint as a Catholic chaplain at another university in Virginia. Watching the reports on the day of the shooting, he wanted to serve where he was needed.

That July, he began to work with the Catholic university community at Virginia Tech. He described the early days as an emotional roller coaster for students, from troubled memories one minute to run-of-the-mill college problems the next.

In his first days there, Catholic students took him on a “spiritual walk” around the campus, showing him the shrines to the victims and Norris Hall, where most of the killings took place, while telling him their stories.

“It broke your heart, that shrine of death and violence,” he said.

Father Grace said many are surprised the university had its largest class of first-year students the fall after the shootings. Parents focused on safety concerns, he said. But young people focused on the student unity displayed at the televised memorial services.

“They saw a huge community in a group hug,” he said.

For Yacup, the murders are a part of his life and his faith experience, but not all of it.

“It does sting every now and then. It is part of me as long as I don’t let it govern who I am,” he said.

The meeting for diocesan directors was followed by the 40th anniversary convention of the Catholic Campus Ministry Association Jan. 6-9. Its theme was “Jesus in a New Generation” as workshops covered topics from “Christ Came to Heal,” focused on mentally ill students, to “What’s Faith Got to Do With It,” which was about the environment.

At the convention, speakers urged the nearly 300 participants to be where their students are, in order to engage them with the challenges of Jesus.

Holy Cross Father Peter Walsh said a Web presence is almost mandatory, whether by having a Web page or being on the popular social networking site Facebook.

“It is kind of like having the church in the public square. Their (students) faith is represented on the large public square,” said Father Walsh. “Students are online. You should be there.”

Walsh and his colleague, Kathleen Byrnes, a campus minister, work at the St. Thomas More Catholic Chapel and Center at Yale University in New Haven, Conn. They are linked to several hundred students through their Facebook profile.

However, Byrnes said the technology is a tool that should at times be shut off. If a student e-mails a serious question, the minister engages the student but invites him or her to have a face to face conversation, she said.

The campus minister also can challenge students to have a “technology fast.” Byrnes said students on retreats are told to leave behind cell phones. Being unhooked from technology is unusual for them and it allows them to focus, she said.

Although today’s students “don’t buy into the institutional church,” they are interested in the spiritual aspects of religion, said Father Moran, who for nine years was the chaplain at Bucknell University in Lewisburg, Pa.

“We have to constantly invite people back to the faith,” he said.