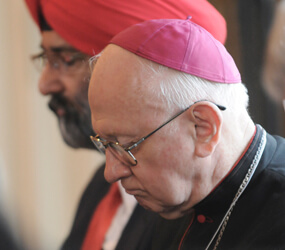 PITTSBURGH – Leaders of the most powerful countries in the world, meeting for the G-20 summit in Pittsburgh Sept. 24-25, have huge economic issues to contend with.

But with latest estimates showing 1 billion people around the world suffering from hunger as a result of the global economic recession, religious leaders believe that, by gathering together to speak for the world’s poor, they can impact those decisions.

Most people in high levels of government “really do want to do the right thing for the poor. They really do have a moral compass,” said Stephen Colecchi, director of the U.S. Catholic bishops’ Office of International Justice and Peace, at a press conference in Pittsburgh Sept. 23.

Part of the power of prayer and bringing together religious leaders at such an event is “the belief that we can influence people,” he said.

Some 30 leaders of Christian, Jewish, Muslim and Sikh faiths attended the press conference before processing in full clerical garb to the Omni William Penn Hotel to meet with representatives of the U.S. delegation to the G-20 summit.

The event was part of the Sept. 22-23 Faith Leaders Summit convened prior to the G-20 and organized by Bread for the World, the Alliance to End Hunger and other partners to “remind world leaders that the most important indicator of economic recovery should be what happens to hungry and poor people,” said the Rev. David Beckmann, president of Bread for the World.

“Really this is a public manifestation on the part of religious leaders with the hope that people involved in the G-20 will come to see the bigger dimension of their decisions,” said retired Pittsburgh Auxiliary Bishop William J. Winter, who represented Pittsburgh Bishop David A. Zubik. “We hope that in addition to their economic concerns they see the moral issues of caring for the world’s poor.”

The leaders had joined the previous evening for an interfaith prayer service at First Presbyterian Church in downtown Pittsburgh.

Colecchi said at the press conference that Pittsburgh is a fitting site for the summit because it represents the struggles of working families.

Despite its accomplishments in economic rebirth following the loss of the steel industry, 22 percent of the city’s population lived below the poverty line in 2007, he said, noting that “since the global economic crisis hit, poverty has been on the rise.”

And unemployment is “high and growing,” now at 7.8 percent. Worldwide, he said, “we have also witnessed a dramatic increase in hunger and poverty,” destroying progress that had been made in reducing global poverty prior to 2006.

From 1990-2005, the number of people living in extreme poverty dropped from 1.8 billion to 1.4 billion, and the proportion of undernourished children declined from 33 percent to 26 percent.

“But as a result of high food prices in 2007 and 2008 and the onset of the global economic crisis in late 2008, the World Bank estimates that the number of people in extreme poverty in developing countries has risen by more than 200 million – 90 million this year alone,” Colecchi said.

“Poverty overseas means not just stretching food budgets,” he said, but also “starvation and malnutrition.” It means people dying early because of preventable diseases, farmers trying to “coax a harvest from fields devastated by drought or floods related to climate shifts.”

The poor are being hit doubly hard, by both the global economic and the looming climate change crises, he said.

Colecchi quoted a letter written in June by the Catholic bishops’ conferences of G-8 nations.

“Ironically, poor people have contributed the least to the economic crisis facing our world, but their lives and livelihoods are likely to suffer the greatest devastation,” it said. “In a similar way, poor countries and peoples who have contributed the least to the human factors driving global climate change are most at risk of its harmful consequences.”

He also quoted a letter from Pope Benedict XVI prior to the G-20 meeting in London, lamenting the threat of cancellation or reduction of foreign assistance programs in Africa and less developed countries as a result of the current economic crisis.

“The cancellation of the external debt of the poorest and most indebted countries has not been the cause of the crisis and, out of fundamental justice, must not be its victim,” the pope said.

Added Colecchi: “We need to ask, how will the G-20’s plans for economic recovery and climate change help working families in our own nation and poor families around the world to feed themselves and lift themselves out of poverty?”