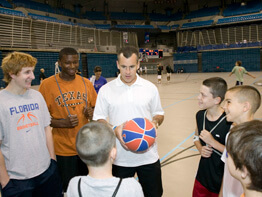 ST. AUGUSTINE, Fla. – The University of Florida’s head basketball coach, Billy Donovan, said he is a “big believer that everything starts with God.”

The coach of the Florida Gators knows a thing or two about good starts with 285 wins in 12 seasons and national championships in 2006 and 2007. In the past 40 years, only Donovan, Mike Krzyzewski of Duke University and John Wooden, a legend at the University of California-Los Angeles, have won back-to-back NCAA titles.

But along with winning games, Donovan said he also has a passion for helping young people find faith, success and happiness.

During the summer, without the distraction of daily team practices and meetings, Donovan relished his chance to work with young people at his annual basketball camps. Even though he doesn’t spend much time with the campers, he said it’s the perfect opportunity to “recharge his batteries” after a long season, reflect on his faith and speak to young people.

“Teenagers have so much in front of them today,” said Donovan, whose boyish smile and boundless energy earned him the nickname “Billy the Kid” from his peers. “The big thing that I’ve always tried to talk to our children about and other teenagers is to try to make good decisions.”

“If your faith is strong and you’re living a faith-based life, the chances are that you will make better decisions and you’re probably going to be happier,” he said.

He says he tries to talk to youngsters about “taking the strengths, talents and gifts God gave them and utilizing them to help other people.” He also asks them to “remember five words: peace, love, hope, joy and forgiveness!”

If people could “feel those five things every single day,” he added, “we would be so happy nothing else would make a difference.”

Donovan said faith is a “gift from God.”

“To me, it’s something that takes away our insecurities, our fears, our self-doubt and our worrying all the time,” he continued. “I think it’s easy to have faith when things are going really well, but I think in everything we do, we worry about the next day, our jobs, our friends, our children, our health, our families.”

He stressed that it’s important to keep one’s faith in tough times, too.

Donovan has had his share of hardships. He and wife Christine have four sons, two of whom are teenagers, but their daughter died at birth in 2000.

For the moment, Donovan’s heart is deeply entrenched in faith, family and in pursuing his coaching passion. “This is what I’m supposed to be doing,” he said. “I have a passion for coaching and trying to utilize the game of basketball to help kids be successful in life.”

The 43-year-old coach encourages young people to pray and read the Bible. One of his favorite Scripture passages during basketball season comes from Chapter 17, Verse 20 of St. Matthew’s Gospel: “If you have faith the size of a mustard seed, you can say to this mountain, ‘Move from here to there,’ and it will move. Nothing will be impossible for you.”

Since he works at a public institution where a lot of different religious denominations are represented, Donovan is careful not to force religious beliefs on anyone.

He said early in his Florida career two players asked him if he had a problem with the group praying as a team before and after practice. The coach supported the idea and every year since then he has asked the players if they want to continue the tradition, and they do.

“I’ve found that most of the kids I’ve coached believe in a higher power,” no matter what their faith, he said. “Just taking time to give thanks to God is always a great thing.”