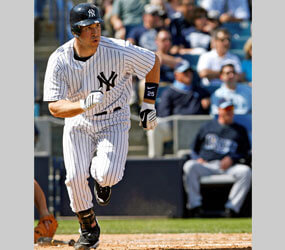 Though she lasted only one day on the softball field for a lack of interest in sliding, Margy Teixeira would be playing baseball, too, if she had been born a boy.

The mother of New York Yankees first baseman Mark Teixeira said she and seven siblings (including three sets of twins) grew up on the baseball field watching her father, uncles and cousins move through the minor league system.

“Everyone played,” said the 58-year-old about her Italian-Catholic family. “It was almost like a legacy.”

So it was no surprise to her when then 5-year-old Mark, sitting across from his parents at the kitchen table, announced, “I want to play baseball.”

Add his name to the family roster.

The graduate of Mount St. Joseph High School, Irvington, has been in the lineups of four major league teams for six years: Texas Rangers, Atlanta Braves, Los Angeles Angels of Anaheim and this season, the New York Yankees.

“I’ve been very blessed in my career,” said the 6-foot-3 switch-hitter Mr. Teixeira, 28, during a January Yankees press conference. “I’ve been given an incredible gift.”

His father John “Tex” Teixeira, 56, whose brother also played in the minors, said his son “has been blessed with a very disciplined personality,” refusing to leave the locker room post-game until his workout is complete and his body iced.

Yet the sport wasn’t – and isn’t – the only constant in the young Mr. Teixeira’s life.

In the character-building roles of “good cop/bad cop,” Margy and Tex Teixeira weaved faith into family life as tightly as stitches on a baseball, raising their two children in Our Lady of the Fields, Millersville, where they are active parishioners.

They held high expectations for their children and missing weekly Mass was not an option, even if there was a baseball game scheduled.

“I used to tell them it wasn’t me making them go to church,” said Mrs. Teixeira, a Pittsburgh native, “but the Holy Spirit working through me.”

Faith remains a heavy hitter – all part of the lineup. The first baseman is a spiritual individual.

“I would not be where I am today,” said the younger Mr. Teixeira, No. 25, “without my relationship with Christ. His love gives me the right attitude to enjoy baseball every day that I step onto the field.”

Mrs. Teixeira said she wishes players had more opportunity to go to Mass. Her brother is an archdiocesan priest – Father Charles J. Canterna, head chaplain of prison ministry for the state of Maryland.

The Teixeiras held their own stadium “trade” last April with their pastor, Father G. Eugene Nickol. They treated their pastor to opening day at Nationals Park in Washington, D.C., when the younger Mr. Teixeira played for the Braves.

“And Father Gene took us to see the pope,” they said.