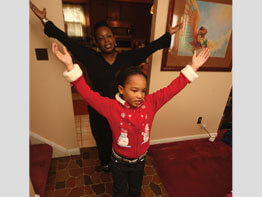 Eight-year-old Jael Smith was all smiles as she danced in her grandmother’s hallway just a few days before Christmas. She knew Gaile DeVance was right behind her the whole time – perfectly matching her every move as the two figures stretched their arms high above their heads, twirled and waved in coordinated gestures of praise.

The 59-year-old grandmother softly sang a gospel tune and kept the beat for the graceful duo, whose choreography was reflected in miniature on the shimmering decorations adorning a nearby Christmas tree.

Laughter filled the room before the pair went through the routine one more time.

Ms. DeVance never thought she would be one of the liturgical dancers at St. Cecilia in West Baltimore. When the group first got off the ground five years go, the former pastoral council president thought she would contribute by helping with the costumes.

“But they wanted everyone to dance – of every age,” Ms. DeVance remembered with a smile.

The mother of four and grandmother of seven has been dancing ever since, participating in weekly practice sessions and using movement to beautify special liturgies throughout the year. The 12-member group, directed by Torena Brown, also makes appearances at other area churches of all denominations.

“Some people can be very staid in worship,” Ms. DeVance said. “This offers an outlet to express your love for the Lord. You can feel free to praise God with dance.”

Dancing with her granddaughter is a special honor, Ms. DeVance said.

“It’s really inspiring to see all the young girls come up and worship God through dance,” she said.

Dancing is only one way Ms. DeVance is active at St. Cecilia. She serves on the fundraising committee, the Ladies Guild, the evangelization committee, the stewardship committee and a group to honor members of the church. She’s also an extraordinary minister of Holy Communion and involved in several other ministries.

“I want to set an example for my children and grandchildren,” she said. “There are many ways to give back. If you’re not participating, you’re not giving back to God.”

Ms. DeVance said she is especially moved by knocking on doors in West Baltimore as part of Operation Faithlift, an effort to evangelize the African-American community. No one has ever closed the door, she said.

“People are really looking for something to make them feel that things can get better,” she said, calling it “a very spiritual experience” to pray for the needs of complete strangers. “We let them know that we are a church that accepts them as they are.”

Faith and love for others is what keeps her going, Ms. DeVance said.

“If you keep your mind on someone else, you forget about your own problems,” she said.