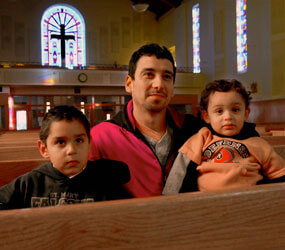 PORTLAND, Ore. – In the heyday of Santiam Canyon’s lumber enterprise, laborers without college degrees could work at any of eight or nine mills, supporting families of four, five or six.

But by 1990, all except a few mills had shut down in the forested region of west-central Oregon. Environmental rules tightened; finished lumber was being imported; raw logs were shipped overseas for milling.

Then the housing-based recession began in late 2008, hitting Oregon particularly hard. Home-building nationwide dropped off, so the three Santiam lumber mills still in operation had to slow down. That caused a chain reaction; mill workers were unable to spend much at local businesses, which in turn had to lay off employees or close completely.

Rick Schindler, principal of the 230-student St. Mary School in the town of Stayton, has been giving tuition aid to more families in the past year and a half.

“More people are applying for the same pie,” he said.

Art and Liliana Pelayo gratefully rely on the help as they send three children to St. Mary’s, despite hard times. Last summer, Philips Windows and Doors closed its plant here, cutting 125 jobs, including Liliana’s. Her husband faced reduced hours at Freres Lumber mill, working only one day a week over a two-month span.

“It was kind of hard just trying to keep the house,” said Art Pelayo, whose mortgage payment is $2,000 per month. He’s had trouble getting it refinanced, since the house’s value has dipped below what he owes.

The Pelayos, members of Immaculate Conception Parish, have lived in Stayton for 12 years.

“This year has been really hard,” said Art Pelayo, 37. “Thank God we are doing better now.”

Roughly 15,000 people live in the Santiam Canyon. The population of the upper area – highly dependent on timber – declined by 2 percent between 1980 and 2000, while the rest of Oregon saw a 30 percent increase.

One of the most telling statistics in an Oregon State University study is the area’s declining percentage of manufacturing jobs, down from 43 percent in 1970 to 15 percent now. That means high-paying jobs have been replaced by low-paying jobs.

Now, the few positions paying a family wage are under pressure because of the recession, especially the slowdown in construction.

That’s the case for Dan Koenig, an electrician from Stayton. He and his wife, Katie, members of Immaculate Conception, have three children ages 4 to 9. A fourth is on the way.

Work hours have shrunk for Dan, especially summer overtime jobs on which the family budget relied heavily. The Koenigs foresaw the problem and started cutting expenses in 2008: no trips, no movies, little eating out. Katie Koenig, 31, runs the after-school program at St. Mary’s to help the family budget.

The daughter of a logger, she recalls better times, but can’t forget the timber slowdown of the 1980s. Some men lost their will to live and marriages fell apart, she said. She’s afraid it’s happening all over.

“I think the area was just starting to recover when this recession hit,” she said.

Michelle Pfohl, 69, lives in a tidy manufactured home high above the rushing Santiam River. Her income falls below the area’s median annual household income of around $35,000. When the stock market plunged in 2008, the retirement income her husband left when he died shrunk by half.

“It was not a lot to begin with, so that’s made things very tight,” Pfohl said.

Pfohl shops infrequently to save gas, eats simply and has cut out frills. She may have to cancel her cable TV and stick to reading old paperbacks. She does not go to movies. Her arthritic knees keep her from full-time work and so she thanks God for Medicare.

A former flower shop owner and a mother of three adopted children, she moved from southern California to Oregon in 2001 with her husband. But he died in 2006 after the couple had been married for 47 years.

After her husband’s death, her roof sprang a leak and a raccoon that climbed into a furnace duct prompted a fire. Repairs cost about $8,000 out of pocket.

“Every time I sit down to pay the bills, I hold my breath,” Pfohl said.

Her greatest fear is a serious and expensive illness. She has no idea how she’ll pay for everything.

Despite the struggles, Pfohl is dedicated to her church, St. Catherine’s. If something needs doing and no one else has time, she steps forward. She handles the flowers, liturgical minister scheduling and sacristan duties. She volunteers at a food bank and a free meal site for seniors.

“If I didn’t have my faith, I couldn’t make it through any of this,” she said.