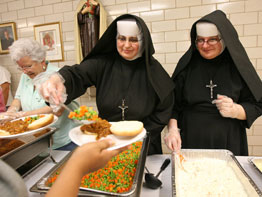 WASHINGTON – People of faith are being urged to “move their feet” to elevate poverty as a campaign issue in the final weeks leading to the November election.

“We have a lot of work to do,” Rabbi Steve Gutow, executive director of the Jewish Council for Public Affairs, told the media and advocates for the poor during a Sept. 9 nationwide conference call that opened “Fighting Poverty: A Week of Action.” The effort is sponsored by a coalition of more than 20 religious groups including Catholic Charities USA.

“We have to … make it clear that we care about something that a lot of elected officials don’t care about,” he said.

Initially, during the week ending Sept. 16, the emphasis will be on seeking out ways to raise awareness of poverty in communities across the country. Rabbi Gutow reported that programs in 100 communities in 36 states were planned for the week.

Follow-up actions will find advocates for poor and marginalized people seeking out candidates and asking for a commitment on how they will address poverty during the first 100 days they will be in office in 2009.

“We need a poverty program like we need a defense program,” Precious Blood Father Clarence Williams, senior director for racial equality and diversity at Catholic Charities USA, told Catholic News Service after the conference call. “Where you find people who are poor, it’s a threat to the common good.”

Catholic Charities USA also has embarked on its own Campaign to Reduce Poverty in America with the goal of halving poverty in the United States by 2020.

The conference call focused on the difficulties for millions of Americans who are underemployed, out of work or facing homelessness because of home foreclosures.

Jared Bernstein, director of the Living Standards Program at the Economic Policy Institute in Washington, said the rate of poverty in the country has started climbing again after declining during the 1990s. Citing U.S. Census Bureau statistics, he said the poverty rate stood at 12.5 percent in 2007, up from 11.3 percent seven years earlier.

The economy is in recession for low- and moderate-income families, he said, noting that there are 2.5 unemployed people for every job currently available.

Mr. Bernstein acknowledged that those statistics clash with government reports that show the economy to be growing.

“If the economy is expanding and yet poverty is rising, where is the growth going? It’s going to the top of the income scale,” he said.

“I’m not predicting that we’re looking at a great depression because there are too many protections in place. But I am very much stressing that the pressures on our economy are as great now as then.”

Two Democratic members of Congress echoed the faith leaders’ call for a campaign to reduce poverty. Rep. John Lewis of Georgia and Rep. Rosa DeLauro of Connecticut said it was time for poverty to become a priority for all elected officials.

The week of action will close with an interfaith prayer service Sept. 16 on the steps of the U.S. Capitol in Washington. Father Larry Snyder, president of Catholic Charities USA, will participate.

A listing of resources for parishes, organizations and families wishing to participate in the events of the week can be found online at: www.fightingpovertywithfaith.com/.