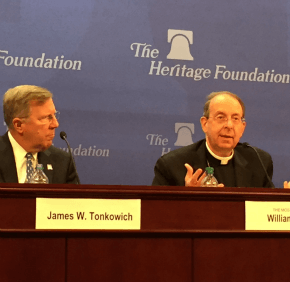 “Hispanic heritage doesn’t have to do with any land or any will or any testament or money or goods,” said Redemptorist Father Robert Wojtek in an abbreviated, English version of his homily at the 2015 Archdiocese of Baltimore Hispanic Religious and Cultural Heritage Mass.

“It has to do with a spiritual heritage we’ve received by the Holy Spirit, and it includes our culture as well as our faith,” Father Wojtek added at the Sept. 19 Mass at the Basilica of the National Shrine of the Assumption of the Blessed Virgin Mary in Baltimore.

Spanish-speaking parishioners from across the archdiocese, with Latin American heritage from Mexico to Chile, gathered for the liturgy which included dance and musical performances and a post-Mass meal.

Father Wojtek noted that in addition to their heritage, the archdiocese’s Hispanic Catholics bring an “inheritance” that includes the values of family, work, generosity, religiosity and sacrifice.

“After the apostles passed on what we’ve received from Jesus, that’s also part of our inheritance,” he added.

Zeny Peralta and others from St. Clement I in Lansdowne celebrated their heritage with an Aztec-inspired dance prior to the Mass. Adding to the peacock-feather headdresses and traditional Aztec garb were sequined images of Our Lady of Guadalupe.

“We celebrate with God, and we say thank you to God for our staying in the U.S.,” Peralta said.

Herbierto Martinez, a parishioner of Holy Trinity, said he enjoyed the Mass, especially Father Wojtek’s homily, which noted that Hispanic heritage in what is now California and Arizona predates the history of the U.S. itself.
“That is a personal point of mine,” said Martinez.

“It’s not like we’re just Hispanic people,” commented Helman Argueta, a parishioner of St. Joseph in Cockeysville. “We’re American people and Hispanic people, and we have the Mass together.”

Also attending the Mass were José Luis, 29, and José Nair, 26, both originally from Honduras. The two were injured in separate accidents involving “the Beast,” a freight train network that migrants use as they pass through Mexico on the way to the U.S. border.

“They both had the same motive – looking for the American dream,” said Father Wojtek, who served as translator in an interview with the pair.

The men said that they also left Honduras due to the excessive violence there, which made them “feel like prisoners in their own country.”

Luis and Nair attended the Mass while six of their companions protested near the White House. All eight were in the midst of a hunger strike. Luis and Nair said that they had not eaten in five days and hoped to make it to 10.

“(Their plan) is to invite people to be in solidarity with them and understand the whole broken immigration system,” Father Wojtek relayed, “and also to remind the people who have made it … not to forget why they’ve come here – to help their families and better their lives.”

According to Luis and Nair, many are fleeing Latin America due to violence, poverty and a lack of jobs. Gangs have become a severe problem, recruiting even young children as drug mules, according to the pair.