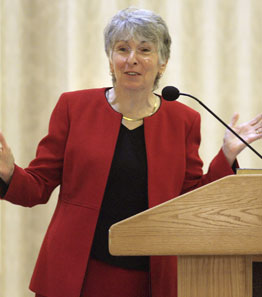 WILMINGTON, Del. – The experience of God “is all family,” Kathleen Chesto told catechists of the Diocese of Wilmington during a recent diocesan catechetical congress.

“Everything important does not happen in church,” Chesto, a nationally recognized speaker and retreat leader, told teachers from schools and religious education programs. She gave two sessions on the role family plays in faith formation.

“The most important things that happen in the process of religious education happen at home and happen long before you’re going to see these children,” she said.

“The first time we cry out at night and somebody answers, we come to believe there is something beyond us, something so good, so loving and powerful,” she said.

Chesto, a Connecticut mother of three who holds a master’s degree in religious studies and a doctorate in family ministry, said family rituals and stories build the foundation for children having an experience of God.

“The church had decided those were sacred hours. Sound familiar to anybody? What is it, folks? It’s feeding time for the baby,” she said.

“Who do you think had it first? Not the church,” she continued. “But the church in its infinite wisdom said, ‘These indeed are sacred hours. Instead of letting the moms and the pops get up in the middle of the night all by themselves, we’ll get the nuns and monks up with them.’”

When parents play something as simple as peek-a-boo with their babies, Chesto said, they teach that “just because you can’t see me doesn’t mean I’m not here. So we’ve got 12-month-olds with a theology of the invisible God engraved in their hearts because their parents play peek-a-boo.”

Noting that television has replaced parents as the primary storytellers for children, Chesto encouraged catechists to give lessons to children that require that they hear stories from their parents.

“Any loving parent has done a good job with the experience of God,” she said. “Now they need to start telling their own stories of faith.”

Family rituals, such as birthdays or even meals that Chesto called “who-we-are moments,” can be lessons in church ritual, too, she said.

Chesto discussed parents who fear their children do not have faith because they do not go to church as they get older.

“There is no insurance your children will live the Catholic faith simply because you did,” she said. “They make a lot of choices we don’t like as they reach adulthood. Their choices for or against faith can be one of them. The fault might lie in our society that stresses individualism.”

Some of the fault is with the church itself, Chesto added, illustrating her point by citing an article that compared religion to a bridge that connects everyday life to the holy.

“For centuries we got so concerned with decorating the bridge, deciding who could cross the bridge, when they could cross it, how many times they genuflected on their way across, what the rules were, we lost sight of the fact the shorelines were moving,” she said. “The bridge wasn’t touching the shore anymore.”

After the Second Vatican Council taught Catholics that they could address God directly, and after Pope Paul VI emphasized social justice, she said, young people walked away from the church because they disagreed with how the church treated women, laity, homosexuals and “those outside the Catholic religion.”

But the problem with that kind of personal, individual faith, Chesto said, is “you can’t take anyone with you. … There are some wonderful values to communal religion that we want to pass on to that generation that has perhaps turned away from it.”

The church has to have a conversation with young adults “at the institutional level,” she said. “The church will have to look at itself, because our young people are leading us in new and wonderful directions.”