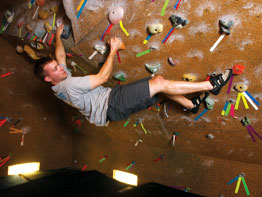 There’s a moment at Loyola College in Maryland’s Fitness and Aquatics Center that will always happen.

New visitors will walk through the eight-year-old building’s doors in the front lobby and their jaws will drop. A long, spacious hallway with high ceilings comes into view, giving the impression anything is possible for anyone.

“I was just shocked at how much was fit into it,” senior Omani Guy said of his freshman encounter at the facility, better known as FAC. “From the outside, it looks big, but not that big. You just think, ‘this is awesome.’ ”

Mr. Guy, now a supervisor at FAC, walked further into the building, and saw a massive pool and a rock climbing wall to the left. Basketball courts and a 6,000-square-foot fitness center sat to the right. Upstairs, there were plenty of racquetball courts and a running track, along with an office for outdoor excursions and exercise studios to explore.

Loyola is one of many colleges across the country to build sparkling fitness centers. Many of its features have been copied by regional colleges looking to appeal to their active student population.

Though it may have all the bells and whistles of the local membership health club, the school’s director of recreation sports, Pamela Wetherbee-Metcalf, said the FAC reflects the Jesuit school’s mission to develop the student as a whole person.

“A lot of the things we do are similar, because you want to do a lot of the trendy things in the industry for college students, so we don’t miss out on those,” Mrs. Wetherbee-Metcalf said. “The idea is that we get them to be fit, healthy and have alternative ways of stress relief.”

The school has gone out of its way to make the multi-million-dollar center, about a half-mile from most campus dorms, accessible for students. Shuttles regularly depart from campus to bring students to the center, which is open 107 hours a week. It has served an instrumental role in attracting and retaining students on campus.

While it may be across Charles Street inside Baltimore, the building feels like the heart of campus. On a busy day, somewhere near 1,300 people – students, professors and alumni – enter the facility.

It also serves as one of the biggest employers on campus.

“I come every morning, so it kind of feels like I live here,” said sophomore Emily Bodkin, who works at the building’s front desk. “I’ll come in the morning, go to class and come back for work. But, I really don’t mind because it’s great.”

The appeal of the facility, Mrs. Wetherbee-Metcalf said, is that there is a place for every interest. Regular classes in Pilates, yoga and ballroom dancing are offered for those interested in more than just lifting weights and playing basketball.

“There are such a wide variety of things for them to do,” Mrs. Wetherbee-Metcalf said. “If you have great facilities and great programs, the sky is the limit.”