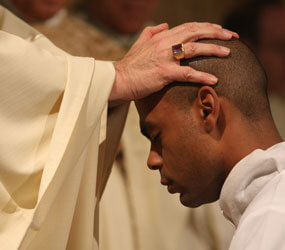 CHICAGO – The Catholic Church Extension Society has awarded more than $3 million in grants to educate 509 seminarians from the most underfunded dioceses in the United States during the 2010 fiscal year.

The grants represent an increase in funding at a time when other foundations have reduced their giving during the recession.

On average, the 84 dioceses designated as U.S. “mission dioceses” spend $30,000 a year per seminarian for seminary tuition, room and board, books, health insurance and related expenses.

If distributed evenly, the Extension Society’s grants would pay for about 20 percent of a seminarian’s education-related costs for 2010.

The number of seminarians to be helped make up about 15 percent of the U.S. total.

The largest growth in Catholic population is taking place in mission dioceses. Growth since 1990 has ranged form 45 percent in Arkansas to 111 percent in Nevada, where Catholics now constitute the largest denomination in the state.

The grants will educate seminarians from 32 dioceses ranging from Juneau, Alaska, to Amarillo, Texas, and Fargo, N.D. Grants also will be given to dioceses in the Samoan Islands and Puerto Rico, as well as to fund the seminary program of the Archdiocese for the Military Services.

An Extension Society spokesman said the seminarian grants were particularly appropriate for the Year for Priests, which started last June and continues through June 2010.

“Educating the next generation of Catholic leadership is critical, especially for those areas of the country where the Catholic population is growing yet parishes and residential pastoral ministers are few,” said Joseph Boland, grants director, in a statement.

“Catholic Extension’s contributions will enable our young people to most effectively answer God’s call to service in these poor and isolated areas where the future of the church is unfolding,” he added.