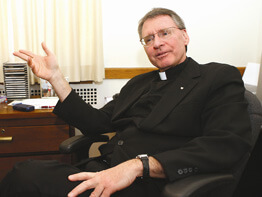 Lent is a time of prayer, a time of penance and a time for sacrificing to draw closer to Jesus and his ultimate sacrifice, said Father James Farmer, pastor of St. Ursula, Parkville, while sitting in his corner office reflecting on how his parishioners and Catholics everywhere can make the most out of the Lenten season.

The season of Lent runs from Ash Wednesday, Feb. 21 through Holy Thursday, April 5 in the Latin rite of the Catholic Church.

“Lent is a special season of the liturgical year, were we focus upon the love Jesus has for each of us,” said Father Farmer. “We know that love is proven in sacrifice. We focus upon the sacrifice Jesus made to bring us to salvation.”

Father Farmer said during Lent it is important to try and develop a stronger relationship with Jesus by giving him more time. Individuals can do this by attending daily Mass, reading a chapter of Scripture each day, saying the rosary while on the way to work rather than listening to the radio, attending a parish mission and going to confession is an essential aspect of this penitential season, said Father Farmer.

“Jesus died for our salvation, one of the seven sacraments he gave us is the sacrament of reconciliation or confession which is an opportunity to have our sins forgiven,” Father Farmer said. “We begin Lent on Ash Wednesday by putting ashes on our forehead and during that time our spiritual focus is upon our need to feel the forgiveness of Jesus.”
St. Ursula will hold a mission March 5-7 with Father Raymond Harris, director of Pastoral Field Education at Mount St. Mary’s Seminary, Emmitsburg, as the guest speaker. During Lent the parish will also offer a 7 a.m. daily Mass for those parishioners who can not make it to the 8 or 9 a.m. Mass.

“Often during Lent we focus on sacrifices we need to make, we give up things, things we enjoy, like candy, alcohol and desserts which is very good,” said Father Farmer. “But in addition to giving things up we need to do good things and having the opportunity to go to Mass every day and having the opportunity to go to the parish mission is a good thing.”

The parish has scheduled more time for the sacrament of reconciliation during the mission and additional times during Holy Week.

“We try to give our parishioners many spiritual opportunities during these 40 days of Lent,” Father Farmer said. “This will be the first time the parish has had a mission in many years.”

In many parishes, parishioners are given small nails and other religious articles as a reminder of the sacrifice Jesus had on the cross. According to Father Farmer the nails show the suffering of Jesus.

“A very important thing to remember about those nails is this – those nails didn’t hold Jesus to the cross, his love for us held him to that cross,” said the newly assigned pastor. “St. John of the Cross once wrote, ‘love is repaid by love alone.’ During Lent we attempt to repay Jesus by giving him our love.”

St. Maria Goretti High School, Hagerstown, like most Catholic schools, attempts to give students as many opportunities as possible to strengthen their relationship with Jesus during Lent. The Friday cafeteria menu is meatless and in St. Maria Goretti’s case the options are still numerous including pizza, crab soup, seafood specials and baked potatoes, said Mary Grove, the school’s administrative assistant.

In addition to meatless Fridays, the school has Stations of the Cross, Mass on the Wednesday before Holy Thursday, Ash Wednesday Mass and reconciliation for all grades.

“What we try to do is look at the three disciplines of lent, fasting, alms giving and prayer,” said Barbara Miller.

The school also offers a Liturgy of the Hours twice a week. Many of the students participate in the rice bowl collection for Catholic relief Services each year and this year the students are holding a fundraiser to support women at a local pregnancy center.
The parishioners of St. Ursula are also involved in outreach to the St. Vincent de Paul Society. They supply food, clothing, and monetary help with rent, utilities and medical expenses for the poor.

“All of us belong to the universal Catholic Church and our faith impacts everyone around us,” said Father Farmer. “If our sacrifice can lighten another person’s burden we are doing a good thing.”

Another aspect of Lent is coming together as a parish or Catholic community. Many parishes have soup and stations on Fridays, like St. Joseph, Hagerstown which has a different organization run their “Ladle and Loaf Meager Meal” at 5:30 p.m. in Riggie Hall before walking over as a worshiping community for Stations of the Cross.

“The Stations of the Cross are the most spiritual and emotional devotion we have in our church,” said Father Farmer. “The Stations of the Cross help us to appreciate the totality of the love Jesus has for us and the enormous sacrifice he made for our salvation.”
St. Ursula has two opportunities for Stations, one during the afternoon and the other in the evening. Father Farmer said the stations are very important for Catholics because they allow us to walk with Jesus on his way to the crucifixion.

“In our lives each of us have crosses to bear. Sometimes the crosses are very difficult, sometimes they are very heavy but none of us will ever have a cross as heavy as Jesus’ cross,” said Father Farmer. “When we think about our own difficulties in life, our own crosses, we offer them to Jesus while he suffered for each of us.”