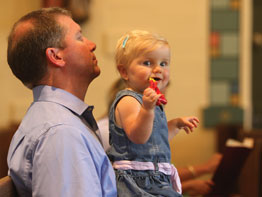 As friends of Miki Hill, the president of Catholic Family EXPO, Kelly and David Updike had annually circled her event on their summer schedules.

“We’ve known about it for years,” Mrs. Updike said, but it’s always been while we were away.”

“Our weekends are so crazy that it’s usually a last minute (decision),” Mr. Updike added.

While the event has been held at the Baltimore Convention Center and Towson University in the past, it found a quainter home at the Church of the Resurrection, Ellicott City, July 25-26.

Serendipitously, time and location worked out for the Updikes, who are parishioners at Resurrection and finally were able to see what the buzz was about.

The EXPO has changed since it was founded 16 years ago as the National Association of Catholic Home Educators. In 2004 the EXPO started targeting all families, while maintaining a home-schooling track. There are four different EXPOs held on the East Coast, the others in North Carolina, South Carolina and Florida.

One of the major highlights was a Mass celebrated by Archbishop Edwin F. O’Brien on July 25. Near the conclusion of the service, Archbishop O’Brien was presented a donation by an EXPO representative for the education and formation of seminarians in the archdiocese.

During his closing address, Archbishop O’Brien said the focus on family has made the EXPO a fertile ground for building the church and asked for continued prayers in attracting new clergy to the archdiocese.

Those thoughts were preceded by a homily in which he said the EXPO could “enrich those around us, those who are unable to come and those who are estranged from the church. This could be a wonderful force of energy and power in this archdiocese as you gather here today.”

The Updikes felt that surge of Catholic solidarity. They brought their four children to the event to participate in their own activities and workshops. Their 14-year-old son, Andrew, was getting ready to attend a Youth Rally Concert and eucharistic adoration that evening, while Sean, 11, Matthew, 4, and 9-month-old Mary remained with their parents.

“You have to bring others to Christ,” he said. “That’s how we’re going to be judged – what we’ve done for the church. It’s not just showing up on Sundays. It’s bringing others to it. It’s not an easy job.”

Mrs. Updike walked around the Expo with Mary, looking at the wide variety of vendors and information tables available. Mr. and Mrs. Updike said they were both interested in Saturday lectures on parenting by renowned author James Stenson.

“Anything to help raise your children correctly,” said Mr. Updike. “It’s a tough world out there, so we’re trying to bring them up the best we can.”