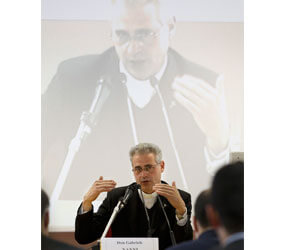 VATICAN CITY – A call to arms – to take up the weapons of the rosary and prayer – rang out at a recent international conference on exorcism in Rome.

The church needs more training of both priests and laypeople in fighting the influence of the devil and bringing spiritual healing to those in need, attendees said.

“This is warfare. We’ve gotten way behind. We’ve lost the concept of spiritual warfare,” said Monsignor Marvin Mottet, the official exorcist of the Diocese of Davenport, Iowa.

The 80-year-old retired priest said that about once a month he sees a serious case of possession and “tons” of cases of demonic influence in which people are being “bothered or attacked by evil spirits.” Those kinds of cases, he said, are “a daily thing.”

Monsignor Mottet was one of 60 people attending a course on exorcism and Satanism at the Legionaries of Christ’s Regina Apostolorum University in Rome March 28-April 2. The annual event is co-sponsored by the Vatican Congregation for Divine Worship and the Sacraments and the Congregation for Clergy.

The course, which does not train people to become exorcists, attracted many people who were already familiar and experienced with exorcism; 10 were from the United States. The majority of participants were priests, but some were lay doctors, psychologists or parishioners active in prayer ministry.

The course looks at the theological and spiritual elements of exorcism as well as the psychological, sociological and criminal aspects of demonic cults, sects and Satanism.

During the breaks and question-and-answer periods, priests eagerly shared theories and “war stories” of strange or difficult cases of possession – all of which could have made fine fodder for a Hollywood screenwriter’s brainstorming session.

Monsignor Mottet and other exorcists said just as there are different levels of the devil’s influence on a person, so there are different methods to counter it – with exorcism being reserved to priests who have their bishop’s permission and are certain the person is experiencing real demonic possession.

The more common problems of temptation and general demonic influence or activity, they said, can be resolved by receiving the sacraments, especially the sacrament of Reconciliation, or prayers for healing and deliverance, which trained lay Catholics can recite.

A parish priest should discern when a person needs medical, psychological or pastoral care and when a session of healing or deliverance prayers, rather than exorcism, is needed, they said.

“We shouldn’t overwork the exorcists. The parish priest should be training laypeople to do deliverance,” Monsignor Mottet said.

Father Gabriele Nanni, an exorcist for the Diocese of Teramo, Italy, and an expert on the history of the exorcism rite, was one of the speakers at the course.

He said fasting and reciting the prayers for the dead or invoking the Virgin Mary are extremely effective in freeing people from demonic influence.

But Father Nanni warned that priests and the faithful should never look at the prayers and rites of exorcism as being “a magic formula.”

He said too much debate over which prayer or rite is better risks taking attention away from the fact that the real power at work in healing is the infinite mercy of God, not which kind of prayers are used to invoke that mercy.

People involved in healing have to really believe the incarnation, death and resurrection of Christ “broke ties of the devil’s power” over mankind, he said.

Father Nanni and Monsignor Mottet said it’s not the priest or the person praying that is doing the work of liberation, it is God, Mary, Jesus or the saint being invoked. “The power is in the name of Jesus, not your voice; you don’t have to yell,” said the monsignor.

Some participants and speakers said they’re convinced demonic influence has increased drastically, in part because of the growth of “La Santa Muerta” in Mexico and other cults, voodoo, witchcraft and Satanic practices, as well as increasing secularism and lack of connection with God and the sacraments.

“The devil ‘needs’ us,” Father Nanni said. The devil “is like a sophisticated car or tool without fuel, without energy, and through the sin of man” he gathers strength “and uses us like a battery to recharge,” he said.

The devil has more power today precisely because there is more sin, he said.

But when there is more holiness, when people begin to forgive others, choose the good and be merciful, that’s less strength for the devil and all of humanity benefits, Father Nanni said.

People think that if they remove God from their lives, they will be freer, said Conventional Franciscan Father John Farao, a prison chaplain in the Diocese of Monterrey, Calif.

“But there is no neutral space. There is light and there is dark. If you leave the light, you open the door to darkness,” he said.

Father Farao said, “People are afraid to believe there is a devil who can seriously affect their lives.” Even Catholics “want to see the kind, gentle shepherd and not look at the demons,” he said.

“Few people want to face the fact that we’re in a spiritual battle. People don’t want conflict,” he added.

Pope Benedict XVI has often spoken about the existence of the devil and, at the start of Lent, urged Christians to make a commitment to “take Jesus’ side against sin” and “engage in spiritual battle against the spirit of evil.”

Going to church regularly, taking part in the sacraments and having “a strong spiritual life is the greatest protection against Satan’s interaction in our lives,” said Father Farao.