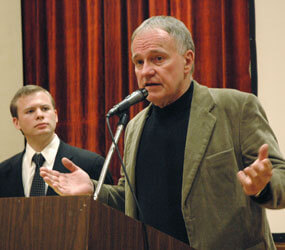 That’s how long wrongfully convicted Illinois death-row inmate Randy Steidl was incarcerated at the Danville Correctional Facility while awaiting execution for two murders he did not commit.

Steidl is one of 139 former death-row inmates throughout the U.S. who have been found innocent of murder charges and released from prison since 1972.

He was the keynote speaker for a recent program at the Archbishop O’Meara Catholic Center in Indianapolis about his wrongful conviction and lengthy imprisonment on death row in Illinois. The event was sponsored by the archdiocesan Office for Pro-Life Ministry.

Investigative work by the Downstate Illinois Innocence Project and the Center on Wrongful Convictions at Northwestern University in Chicago also contributed to Steidl’s release from prison in May 2004. His co-defendant, Herb Whitlock, was freed in 2008.

“It’s a tragic story,” Steidl said of the book. “It was hard for me to read. It took me 10 days. Most people pick it up and can’t put it down. It’s about corruption and politics in the Illinois State Police.”

Before the program, Steidl talked with Sister Diane Carollo, director of the pro-life office, about the injustice of capital punishment then spent time praying before the Blessed Sacrament in the Holy Family Chapel at the Catholic Center.

“I was born and raised Catholic,” he told the gathering. “I went to a parochial school and was an altar boy until I went to high school. Then it was kind of hard for Mom to drag me into church on Sunday. But I still believed in God, went to Mass and confession, took Communion and said my prayers.

“But I had my dark moments when I was sitting on death row,” Steidl recalled. “I said, ‘How could this happen? It’s not just me that they’re doing this to.’ They did it to my 9-year-old son, 14-year-old daughter and the rest of my family. I could see the pain in their eyes when they came to visit me on death row, and when they had to leave. No 9-year-old boy should have to go through that.”

Steidl said he would often become angry and question his faith while locked in his prison cell for 23 hours every day.

“There were times I asked God, when I laid down at night in my cell, ‘Please, I can’t do this anymore. Just let me go to sleep and not wake up,’“ he admitted. “I prayed hard to God to make it easier on my family so they wouldn’t have to go through this anymore. But every morning, I woke back up to the same routine – day after day after day. I got to thinking after a while that God must have a plan for me, but he was sure taking his time.”

Steidl said he was visited in prison by “a couple of good priests” who told him, “Never abandon God. Never abandon your faith.”

His mother went to Mass and prayed novenas on his behalf, pleading with God to release her son from prison.

Her prayers were answered when Callahan began investigating Steidl’s case as part of allegations of police corruption.

Steidl has unanswered questions about his wrongful conviction and incarceration.

“How come we have a legal system in place that put 139 of us now on this country’s death rows for crimes that we didn’t commit?” he asked. “We’ve got a capital punishment system that is broken. How can you believe in a system like that? The death penalty is nothing more than a hate crime.”

Steidl said he considers himself “one of the very, very fortunate ones” because he was finally released from prison even though he spent nearly one-third of his life in a cell for something he didn’t do.

“You can release an innocent man from prison,” he said, “but you can’t release him from his grave.”