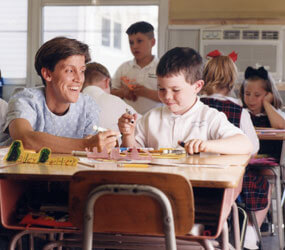 WASHINGTON – A gallery at the Smithsonian Institution in Washington has taken on a mystical quality in the form of an exhibit called “Women & Spirit: Catholic Sisters in America.”

The dimly lit S. Dillon Ripley Center at the Smithsonian Institution holds more than a few nun’s habits and artifacts. The exhibit also features state-of-the-art multimedia images, photos and historic narratives depicting the impact Catholic sisters have had in the U.S.

“It’s really amazing to see all they’ve done for our country,” Smithsonian spokeswoman Becky Haberacker told Catholic News Service during a recent tour of the exhibit, which made its Washington debut Jan. 15. “It’s also really interesting to find out how rugged they are. That just isn’t something I imagined before when I thought about nuns.”

For nearly 300 years communities of U.S. women religious have had a lasting place in the American social and cultural landscape and this new traveling exhibit honors their work and showcases their role in American society.

The exhibit includes an 1804 letter from President Thomas Jefferson to an Ursuline nun, braided corn husk shoes worn by pioneer sisters, the nurse’s bag of a nun used during the Civil War and student work from the Oblate Sisters of Providence, the first all-black community.

During the tour, Sister Annmarie Sanders – a Sister of the Immaculate Heart of Mary who is communications director for the Leadership Conference of Women Religious – spoke of her pride in her organization’s role in assembling the traveling exhibit.

Sister Annmarie also beamed when she talked about the women featured in the exhibit.

“So if people come to the exhibit, they would meet sisters who have been doctors, lawyers and women who did incredible things in the early days who served the immigrant population in ways that people probably never dreamed possible,” she said.

Perceptions of women religious 300 years ago, and today, are often not accurate, Sister Annmarie said.

“So, we think this exhibit would show another side to what the public might normally perceive as the life of Catholic sisters.”

People who come to see the exhibit will learn that 12 Catholic sisters arrived in New Orleans in 1727 eager to begin their work in what was considered the “New World.”

In the subsequent centuries, the nuns have established hospitals, schools, universities, homeless shelters and orphanages, while providing countless other social services to millions of people in the U.S., said Sister Mary Waskowiak, president of the Institute of the Sisters of Mercy of the Americas, who also was involved in launching the exhibit.

“The fact that almost a quarter of a million women, as religious sisters, have shaped the life and culture of, I believe both the Catholic Church and American society,” is an amazing contribution, Sister Mary told CNS.

“A quarter of a million people who felt called,” she said, “and as I think about these women whom I have read about, I see their stories and I know, some of them are alive today, for me they are women who cared and women who dared.”

The “Women & Spirit: Catholic Sisters in America” exhibit was first displayed last May in Cincinnati, then moved to Dallas in September, before coming to the International Gallery in the Smithsonian’s Ripley Center in January – where it will remain until April 25.

After the exhibit wraps up its Washington tour, it travels to the Statue of Liberty National Monument/Ellis Island Immigration Museum in New York from Sept. 24 to Jan. 22. Then it moves to the Mississippi River Museum in Dubuque, Iowa, where it will be from February to April 2011.

The exhibition’s Web site is www.womenandspirit.org.