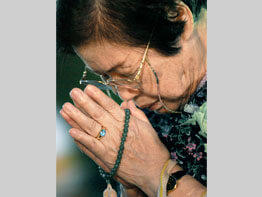 WESTON, Vt. – Natsumi Nagao was 14 when the United States dropped an atomic bomb on Hiroshima, Japan, during World War II. She was injured so badly her skin hung off her body and had to be cut off. When her father found her several days later, the only way he recognized her was by her cries.

Until two years ago Nagao was unable to speak about the horror of that day in 1945, but she brought her story to the Benedictines’ Weston Priory earlier this summer for a special presentation opening the Hiroshima-Nagasaki Atomic Bomb Exhibition, on view at the priory until Columbus Day weekend in October.

The exhibit includes photographs and testimonies about those fateful days, Aug. 6, 1945, when thousands of people were killed in Hiroshima, and three days later, Aug. 9, when thousands more died in Nagasaki, Japan.

The Benedictine Brothers of Weston Priory were hosting the exhibition for the Hiroshima Peace Culture Foundation, which seeks to have at least two exhibitions in each state as a way of keeping alive the memory of the atomic bombs.

“People who have been through (an atomic bombing) feel responsible to warn others about what will happen if the nonproliferation treaty is not enforced,” commented Brother Daniel Saavedra, one of the Benedictine brothers who served on a committee to receive and display the images for the exhibition.

If the treaty is not followed, “the whole world will be at risk,” he told The Vermont Catholic Tribune, newspaper of the Burlington Diocese.

Included in the exhibition are photos of billowing mushroom clouds, shadows cast by heat rays, damage to human bodies and a rosary made of glass beads that melted like taffy in the Nagasaki bombing.

Brother John Hammond, also on the exhibition committee, said it is important for the world to remember what happened in Hiroshima and Nagasaki.

“If we forget what has happened, it’s going to get worse. There is a loss of memory happening in our culture. People are so distracted by stress and the (fast) pace, they forget,” he said.

The exhibition aims to help people remember that two huge cities were annihilated in seconds, and the suffering inflicted there continues as survivors deal with aftereffects.

“It is a memory of our culture that we dropped two bombs that obliterated two cities of people,” Brother Hammond said. The exhibition calls viewers to think about that memory.

“While we offer (at the priory) a place of peace, we want to offer a place of reflection, of memory,” Brother Hammond said. “What have we learned? We have it in our hands to destroy (with nuclear weapons) the lives of others and our own lives.”

Brother Saavedra said many people take the inevitability of war for granted, thinking it is a natural way to resolve human conflicts. “But unless we wake up, the nightmare will continue with deadly consequences,” he said.

Brother Peter Anctil, another exhibition committee member, said nations need to resolve political problems with nonmilitary solutions. He called upon world leaders to take account of legitimate grievances on both sides of a conflict, have patience in dialogue and find ways to deal with conflict without using military means.

“There are real issues, some so critical for the life of people on this planet and the planet itself,” Brother Hammond said.

Brother Saavedra, who grew up in Mexico, said there is a real relationship between the use of a nation’s funds for the buildup of military resources and human suffering, poverty and death.

As important as it is to keep alive the memory of the obliteration of the two Japanese cities in World War II, it is important too to pray for world peace, the brothers agreed.

“We’re hoping for a change of consciousness,” Brother Hammond said. “We have as human beings within our power the capacity to destroy the planet and one another. That’s a different consciousness than I had as a child in 1940. Humans have the power to destroy life as we know it.”

Brother Saavedra said prayer is meant to change hearts, and he hopes for people to be changed from complacency and numbness to a commitment that the destruction such as that inflicted on Hiroshima and Nagasaki will never happen again.

“We had the Holocaust. We had World War II and then a series of wars, none of them solving anything,” Brother Hammond said. “Now we are asking, ‘Has nothing changed?’“