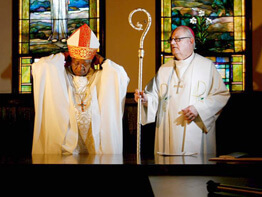 WASHINGTON (CNS) — Raymond A. Grosswirth of Rochester, N.Y., and Dominic Riccio of Newark are the latest married men to be illicitly ordained Catholic priests by excommunicated Archbishop Emmanuel Milingo.

Like the married Zambian archbishop who ordained them, the two were automatically excommunicated for participating in an ordination ceremony not sanctioned by the church.

The ordinations took place Dec. 10 at Trinity Reformed Church in West New York, N.J., run by Patrick Trujillo, one of four men ordained as bishops by Archbishop Milingo in September. The ceremony came at the close of a three-day convention of Married Priests Now!, formed by the archbishop to promote a change in the celibacy requirement for Catholic priests in the Latin Church.

Marianna Thompson, director of communications for the Diocese of Paterson, N.J., the diocese in which the ordinations took place, said in a statement that the archbishop’s “words and actions … fall outside the purview” of Paterson Bishop Arthur J. Serratelli and other local church officials.

According to a report by The Associated Press, Archbishop Milingo told the two men to “teach the word of God and put into practice what you teach.”

Riccio, 72, and his wife, Claire, have four children and two grandchildren. Grosswirth, 57, has been married since 1994 to his wife, Brenda.

Earlier in December, Archbishop Milingo issued a statement accusing the Vatican of racial and economic discrimination for its decision to excommunicate him, while not taking the same action against Chinese bishops aligned with the government-sponsored Chinese Catholic Patriotic Association or married bishops belonging to the Polish National Catholic Church.

“The Vatican excommunicated me on Sept. 26, two days after I consecrated four married men as bishops, because I am from the poor country of Africa,” he said in the Dec. 2 statement.

“But this year China consecrates its third bishop without a mandate and receives no excommunication. And the Polish National Catholic Church ordained four married bishops and received no excommunication,” the statement added. “This is unfair treatment and is racially motivated. The Vatican discriminates racially and economically.”

Two days after Archbishop Milingo’s comments, the Vatican issued a statement saying that a new Chinese bishop and the bishops who ordained him Nov. 30 face automatic excommunication if they acted of their own free will.

“The Holy See is aware of the spiritual drama and suffering of those churchmen — consecrating bishops and ordinands — who find themselves forced to be an active part of illegitimate episcopal ordinations, thus going against the Catholic tradition that in their hearts they desire to follow faithfully,” the Vatican said.

The Polish National Catholic Church, which permits married clergy, broke from the Roman Catholic Church in 1898, primarily over administrative disputes between Polish-American parishes and the largely Irish-American and German-American hierarchy of the time.

Since 1993 members of the Polish National church have been allowed to receive the sacraments of penance, Eucharist and anointing of the sick from Roman Catholic priests, and dialogue between the two churches is continuing.