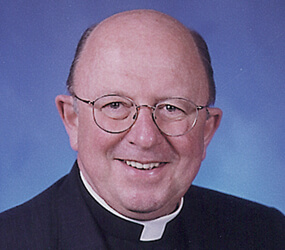 Towson Catholic High School is closing after 87 years. The school was founded and operated by Immaculate Conception parish. The pastor, Monsignor F. Dennis Tinder, announced the closure in a July 7 letter to families. A decline of more than 80 students and a deficit of $650,000 led to the decision.

Monsignor Tinder has not spoken with the media until agreeing to talk to The Catholic Review. During a 20-minute interview on July 9th, Monsignor Tinder addressed questions about the decision.

Catholic Review: How long has this been considered?

As the semester neared its end, we were again confronted with the reality that we had to redo the budget. We had been budgeting 230 or 240 children and we knew that we would not get there. So, we redrew the budget at the end of the semester so that it reflected 205 students.

To get that budget in line required us to go back and reduce staff again. We cut a variety of staff. So, that got us to that budget number. Meanwhile, we knew that our collections on the present year were significantly in arrears, but we had every hope that we would begin to see that money come back in.

The board met at the beginning of June and accepted the new budget, with the understanding that we needed to meet those targets in order to open the doors. As the past year was in deficit, we (Immaculate Conception) were spending our cash. In the month of June, we were expecting movement in the repayment of tuition and movement in student population.

In fact, there was neither. The pay-down of the present year’s tuition did not happen nor did new student population. At the beginning of July, we realized that we were jeopardizing everybody if we opened. We couldn’t pay anyone past October. We would spend next year’s tuition money to pay down the deficit and then we couldn’t pay teachers. It was just an untenable situation. By the end of October, we would have been out of cash. Nobody wanted to be there. That’s not a service to anybody.

If we didn’t go ahead and close now, we were going to make it even more difficult for people to find placements for the future. So, that’s what drove the decision. We were trying up until the very last minute to find a way to keep the doors open but we were not able to do that.

CR: How did the final decision come together earlier this month?

Monsignor Tinder: Both the parish and school financial groups and then executive committee board met and made the recommendation. Then they touched based with the rest of the board members. They agreed that we should make this recommendation to (Archbishop Edwin F. O’Brien) and he accepted our recommendation. In addition, I consulted with our parish corporators, who encourage me, and with the leadership of our pastoral council.

CR: When you told the archbishop, what was his reaction to the final decision?

Monsignor Tinder: I would say that everybody involved, including the archbishop, expressed concern for the students and faculty. The archbishop, in addition, encouraged me and said, “You know this is not going to be an easy process and you will be the person who shoulders the responsibility.” He promised me his support and care. His major concern was the kids and faculty.

CR: Obviously, this was never going to be a popular decision…

Monsignor Tinder : Both my sister and my brother graduated from Towson Catholic. I went to school at Immaculate Conception (the parish elementary school). Many of my classmates went to Towson Catholic and graduated from there. It’s been part of my family forever. There is a personal sadness that goes with this that’s very poignant. One of the letters circulating on the Internet suggested that I came (to the parish as pastor in 2000) with the decision to close the school. That’s 180 degrees from the truth. I came determined to make the school fly for the future. So, there’s personal sadness and a sense of personal defeat that I was not able to do that. I wasn’t able to do it.

CR: How long has this fight to keep the school open been going on?

Monsignor Tinder: I would say since I arrived, at least. We’ve had a series of internal difficulties with leadership in the school that has just made it more difficult. It was clear when I came the school had no endowment and no alumni support. Less than one percent of alumni were giving to the annual appeal. We hired alumni directors. We’ve done a number of things, but we’ve never managed to turn that corner. The truth is we’ve been two schools. (Towson Catholic) was a parish school that educated a large number of parish children and then that ceased in the late 1970s and early 80s. As that ceased, we began educating a whole different community of people – wonderful people – but a different community. So, it was hard for them to be the same alumni.

CR: So, it began to not feel like a parish school?

Monsignor Tinder: It had stopped being a parish school. It had ceased to be a parish school. That sets up a special problem because people in the school begin to think people in the parish don’t care about them. There’s a whole series of emotional things that go along with that. The fact was the parish was pouring money into the school for exterior renovations and the whole fabric of the school, but nobody ever feels that.

CR: What would you say to those who say this should have happened at some other point?

CR: Was there any sense of where those 80-plus students had gone?

Monsignor Tinder: I do not know the answer to that. I just don’t know the answer. We’re talking really over a period of years. We began last year down and it continued to deteriorate. During the year the deterioration was financial and some discipline issues cause some movement out of the school. Most of it was financial.

CR: What do you say to the people who are pleading to reach out to famous former students (like NBA players Carmelo Anthony and Donté Greene)?

Monsignor Tinder: Fundraising ought to focus not on operating expense, but on other tangibles and intangibles. If you can’t operate, then it is amoral to ask someone to give you their money. You ought to be able to find a way to operate. I’m not sure it’s even just to call an alumnus to lay the responsibility for a school on them when the community itself is not able to manage its operations. I think that’s a principle of fundraising. You don’t fundraise for operations.

CR: What happens to the school building now? Are there plans for it?

Monsignor Tinder: No. We have a whole process of closing down from the archdiocese that you have to go through. We have a large elementary school that is also going to be aware there is a building here. But, there are no plans. It will take us some time to manage that. We’ve told all comers that we’re not willing to entertain any suggestions at this point and that includes the elementary school. They’re not in position to make plans for the building either.

CR: What is the future of Immaculate Conception School? Do you see it continuing to thrive?

Monsignor Tinder: I do. I see it as the premier elementary school in our area. From all I can tell, our program has been very effective in training and educating children. I have nothing but strong hopes for the elementary school.

CR: What is Towson Catholic’s legacy?

Monsignor Tinder: There’s a wonderful cadre of alumni throughout the Baltimore area and I think alumni will continue to celebrate what Towson Catholic did for them. It was always a small school doing great things. That stretches back through the 30s, 40s, 50s, 60s, 70s, 80s and 90s. I think that community of alumni will continue to be strong. It is our intention to support a continuing alumni organization.

CR: There have been a lot of things said about you over the last few days. Is there anything about this decision that has been misunderstood?

Monsignor Tinder: I share the sorrow of having to close Towson Catholic and would wish that I did not have to do it. That would have been my fondest wish and it was my operating principle. I accept the responsibility of having to be the one who called the archbishop and telling him the decision. I was as sad about it as anyone else.