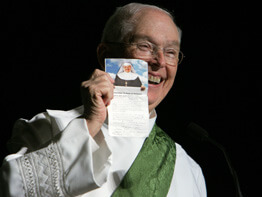 IRONDALE, Ala. – While working as a successful lawyer and senior partner in his firm, Deacon Bill Steltemeier saw a flier on “sounding the call to holiness” at a church in the Chicago suburbs near a legal convention he was attending in 1978.

Deacon Steltemeier, now CEO of Eternal Word Television Network, was tired and there was a blizzard outside, but he felt compelled to try to go to the program.

After running out of gas and almost turning around, he finally found the church by accident and was surprised by the message he heard.

“I had never heard anything like this in my life – this call to holiness for every man, woman and child,” said Deacon Steltemeier, who was ordained a deacon in 1975.

He took a seat up front, and a few minutes later, Mother Angelica looked straight at him, and Deacon Steltemeier heard an interior voice say “until the day you die.”

He said he “just knew” that meant he would be with Mother Angelica until the day he died, but he couldn’t accept it because his whole life was planned.

At the time he had his own law firm in Nashville, Tenn., was involved in a real estate project and was the Catholic chaplain for a 2,000-man prison.

“I was angry. I said, ‘Surely this cannot be the Lord. I can’t change my life in midcourse.’ I was happy,” he said.

The deacon tried to ignore what he had heard, but about three months later he drove to the Poor Clares monastery in Irondale, near Birmingham, where Mother Angelica was mother superior.

When Mother Angelica came to the door, she smiled and said, “I wondered when you were coming!”

Deacon Steltemeier listened to her life story, including God’s call for her to evangelize. On a second visit, he offered to give up everything immediately and move to Alabama and help her, but she said no.

“Everything had to be done gradually, nothing sudden, because the Lord leads us one day at a time,” he said of Mother Angelica’s approach. “We have to live in the present moment.”

He made the final break with his former life in 1981-82, and by that time all the imagined complications had vanished.

Since that time, Deacon Steltemeier has learned from Mother Angelica by working with her and said he seeks to grow in holiness and to guide his employees to holiness as well.

“If I’m the boss, I have to set the example,” he said. “I call people in my office and tell them what I expect. I share my faith with them. They don’t have to be Catholic, but I want them to take the Lord seriously.”

When Mother Angelica shared her inspiration with Deacon Steltemeier to form a television network, he agreed to help, although neither of them had any experience in this line of work.

EWTN aired for the first time Aug. 15, 1981. “Mother slapped me on the back and said ‘Congratulations, you are now president of a TV network!’“ he said.

EWTN now reaches more than 123 million homes in 144 countries and territories worldwide with 24-hour programming. The network’s mission is to communicate the teachings and beauty of the Catholic Church and to help people grow in their love and understanding of God and his mercy, using television, radio, the Internet and publishing.

Having left everything behind, Deacon Steltemeier has never had such peace, he said.

Although they were all busy, Mother Angelica always said that without a deep prayer life nothing would work.

“Mother taught me how to sit before the Blessed Sacrament, with no rosary, no Bible, no nothing,” he said. “She would say, ‘Just look. Just look at Jesus. It’s like being in the sun. Go get a sun tan.’“

After a while, Deacon Steltemeier began to imitate Mother Angelica, spending four hours a day in prayer, including Mass and the Liturgy of the Hours.

“Within 30 days, I scheduled no meetings after 4 p.m., and no meetings before 9 a.m.,” Deacon Steltemeier said. From 4 to 6 p.m., he spends time before the Blessed Sacrament.

“Let things revolve around the Lord. He has to be first,” he said. “He makes everything easy.”

In 1998, Mother Angelica stepped down as the head of EWTN and Deacon Steltemeier was appointed chairman and CEO. In December 1999, Mother Angelica suffered a severe stroke. The deacon and his wife, Ramona, moved from Nashville to Alabama, after years of his traveling back and forth.

The network celebrated its 25th anniversary in August 2006. The deacon sees EWTN expanding to reach even more people by radio and television.

“I would say that Bill Steltemeier was loyal, faithful and trustworthy. He was never too tired to do anything I asked him and his fidelity to the church has been praiseworthy,” said Mother Angelica. “I thank the Lord God that he was a vital part of our lives for so many years and continues to remain so.”

Contributing to this story were Michelle Laque Johnson and Fran Rajotte.