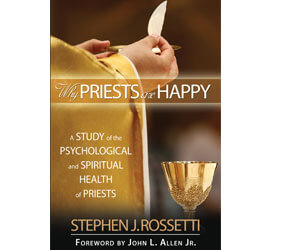 WASHINGTON – Monsignor Stephen Rossetti is out to correct the myth that the typical Catholic priest is “a lonely, dispirited figure living an unhealthy life that breeds sexual deviation,” as a writer for the Harford Courant once put it. And he’s got the data to prove it.

The research is “consistent, replicated many times and now incontrovertible” that priests as a group are happy, Monsignor Rossetti told a daylong symposium on the priesthood Oct. 5 at The Catholic University of America in Washington.

The symposium was built around “Why Priests Are Happy: A Study of the Psychological and Spiritual Health of Priests,” a new book by Monsignor Rossetti. A priest of the Diocese of Syracuse, N.Y., he is a clinical associate professor of pastoral studies at the university and former president and CEO of St. Luke Institute in Silver Spring, a treatment facility for Catholic clergy and religious.

The research found, among other things, that priests are “no more and no less depressed than anyone else in the world,” “a little bit better than the laity” in studies that measure human intimacy and “quite a bit lower than the general population” in the degree that they are experiencing emotional burnout, the priest said.

He expressed concern, however, that 42 percent of priests in the 2004 survey – “and probably more than 50 percent today” – said they “feel overwhelmed by the amount of work they have to do.”

“We need to do something about that,” he said. “We need to get together with the bishops and say, ‘Let’s talk about this.’”

Monsignor Rossetti said the primary source of happiness for priests is “a powerful spiritual life” and “a connection to God and his people.”

“When you get closer to the Lord you build friendships,” he said. “If you don’t love the God image in the person next to you, how can you love a God you cannot see?”

He said younger priests are more likely to participate in “traditional prayer practices” such as eucharistic adoration and recitation of the rosary, but not out of a desire to return to a pre-Vatican II church. They also are much more likely than those in the middle years of their priesthood to affirm the value of celibacy.

The priest said he is not sure why there is such resistance in the media to the idea that priests are happy, despite the evidence.

He said many in the media believe that “religion stifles humanity and personal freedom” and subscribe to what he called “eat your peas theology.”

In the same way that children are told to “eat your peas” in order to get dessert, some believe that “God rewards us for doing this miserable thing,” as they see religion, he said. That viewpoint doesn’t jibe with the idea of happy priests, he added.

The symposium was sponsored by Catholic University’s school of theology and religious studies, St. Luke Institute, Theological College and the Society of St. Sulpice.