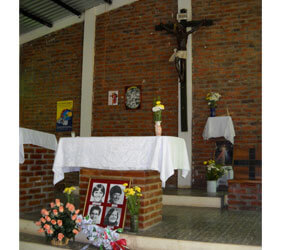 WASHINGTON – William Ford, the late brother of Maryknoll Sister Ita Ford, was honored in a Capitol Hill event Jan. 6 for his 28-year pursuit of justice for his sister and three other U.S. churchwomen murdered in December 1980 in El Salvador at the height of the nation’s civil war.

“We honor one person, William Ford, whose life … and that of his family was changed forever by the death of his sister,” said Maryknoll Sister Janice McLaughlin, president of the order. Ford died in 2008.

She noted that the gathering was the first time that an effort had been made to bring together all those who worked with and knew Sister Ita, Maryknoll Sister Maura Clarke, Ursuline Sister Dorothy Kazel and lay missioner Jean Donovan, and those who worked after their deaths to bring their killers to justice and to seek changes in the Salvadoran government and in U.S. policy in Central America. The event also remembered Maryknoll Sister Carol Piette, another missioner in El Salvador, who drowned earlier in 1980 while escorting a newly released prisoner to his home.

The 30th anniversary commemoration of the women’s kidnapping and murder featured the presentation of the Maryknoll Sisters’ Justice Award to Bill Ford’s wife, Mary Anne. Other Ford family members and relatives of the other women also attended the reception in the Rayburn House Office Building, as did several members of Congress, former Sen. Chris Dodd, D-Conn., many members of different religious orders and representatives of the Obama administration and the Salvadoran ambassador to the United States.

Assistant Secretary of State Michael Posner, head of the department’s Bureau of Democracy, Human Rights and Labor, presented Mary Anne Ford with a Salvadoran-made plaque commemorating her husband’s work to shed light on the women’s deaths and on the U.S. role in supporting the repressive Salvadoran government.

Posner recalled that at the time of their deaths, he was part of the fledgling Lawyers Committee for International Human Rights when he got a call from the Maryknoll Sisters informing him about the women’s deaths and asking for legal help.

People warned that “we would never be able to do anything in Congress… we would never be able to hold anyone responsible,” Posner said. Through the persistence of Bill Ford and others in the religious and human rights communities, five members of El Salvador’s national guard were found guilty of the murders in 1983. Efforts to hold the guardsmen’s superiors responsible led to civil trials in the United States of former generals Carlos Eugenio Vides Casanova, a former director of the Salvadoran national guard, and former Defense Minister Jose Guillermo Garcia.

Though a federal jury cleared the men of culpability in the women’s murders, in 2006 the 11th U.S. Circuit Court of Appeals upheld a civil suit holding them responsible for torturing three Salvadorans and awarding the plaintiffs $54.6 million.

“We never felt we completely got justice,” Posner said. But with the help of Dodd, former Sen. Arlen Specter, D-Pa., and others in Congress who pushed for an investigation and prosecution, the trial of the guardsmen in El Salvador was “the first break in a culture of impunity,” he said.

In accepting the award, Mary Anne Ford said her sister-in-law’s death led to her husband’s transformation. As he began to find out what Sister Ita’s life among the poor of El Salvador was really like, his mission became not so much to seek justice for “the authors of a crime,” as it was “that the lives of the women would be remembered.”

Dodd and Democratic Reps. Marcy Kaptur of Ohio and Nita Lowey of New York praised Bill Ford’s work as an example of how one person can make a difference. Dodd and Kaptur recalled that the women’s murders were one of the first big issues they faced when elected. As a new senator, Dodd sat in on Foreign Relations Committee hearings that helped shed light on the U.S. role in funding the Salvadoran government.

And both told of being advised by the late House Majority Leader Tip O’Neill, D-Mass., about where to get information and advice about foreign policy.

“I listen to the nuns,” O’Neill told both.