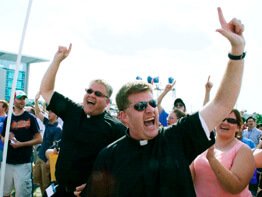 OMAHA, Neb. – Members of more than 275 churches in Omaha attended the Luis Palau Heartland Festival July 14-15 to listen to Palau and to praise Jesus.
Omaha’s event was the first time a Catholic archdiocese or diocese had publicly endorsed the Palau festival, with Omaha Archbishop Elden F. Curtiss making an appearance onstage to address the crowd of more than 45,000 people the first night.
An estimated 105,000 attended the event over the two days.
“All of us here share something in common – our commitment to Jesus and his Gospel,” the archbishop said in his address. “He is the Savior … sent into our world to save us from our sins and to lead us home to the Father.”
Palau, a world-renowned Christian evangelist who has been preaching to crowds for more than four decades, has held festivals since 1999, drawing more than 4.5 million people. He also reaches a worldwide audience through radio, television, print and the Internet. His ministry’s headquarters is in Oregon.
In Omaha, a Catholic tent, sponsored by the archdiocese, was set up near the entrance of the festival and had rosaries and issues of the Catholic Voice newspaper, the primary evangelization tool for the archdiocese, to give away. Catholic radio station Spirit 88.9 FM had two booths at the festival.
Priests heard confessions and talked with visitors who wanted to learn more about the Catholic faith or just to visit with fellow Catholics.
Steve Orsi was one of many volunteers on hand to minister to people who had questions about the Catholic faith.
“My pastor … said we cannot evangelize if we’re not involved, so it’s good to be down here and answer any questions, helping bring people home and closer to the truth,” said Orsi, a parishioner at St. Stephen the Martyr Church in Omaha.
Lynette McCowen, a member of Sacred Heart Parish in Omaha, listens regularly to Palau’s ministry on a local Christian radio station.
“I’m overjoyed that this is taking place because it’s Omaha and he has been everywhere else in the world,” she said. “We’re bringing Christians of all faiths together and it’s a blessing in our city.”
Father Carl Zoucha, pastor at Our Lady of Guadalupe Parish in Omaha, was one of many priests who participated in the event.
For hours both days he stood near the entrance sidewalk, welcoming people to the festival. He encountered some looking for spiritual direction and, at times, an apology.
“There were a few people who had been hurt by their own church, as well as people hurt by our church,” he told the Catholic Voice. “I was able to communicate to them in the name of Jesus and the church of Jesus ‘I’m sorry,’ and that really connected with them. They just paused and said, ‘Thank you. No one has said that. That really means a lot.’”
Father Zoucha said he hopes the festival will help religious groups join together on local issues such as the pro-life movement and the struggles that different neighborhoods have in overcoming wayward youths and broken families.
During the course of the festival, people were invited to fill out response cards that stated their religious affiliation. Of the 5,000 cards the Palau organization received, 700 were from Catholics, said Father Ryan Lewis, vice chancellor and ecumenical director of the archdiocese.
Those 700 were sorted according to address and given to 11 Catholic parishes assigned for follow-up.
“I thought the weekend was an extraordinary success in terms of numbers of participants, in terms of Catholic participation, in terms of relationships that were made, friendships that were forged,” Father Lewis said.
For many churches, the festival was the first time they worked with members of other faiths, he said.
“Being a part of this festival, there was a real eye-opening in the Protestant community, especially the evangelical community, to all the good work that the Catholic Church is currently doing,” he said.
Father Lewis said he hoped that as a result of the festival Christians and Catholic Christians will be able to work together on programs that already exist in the Catholic Church.
“I don’t know why an evangelical youth group couldn’t team up with a Catholic campus ministry group at one of our high schools and do stuff together. I think that would be excellent,” he said.