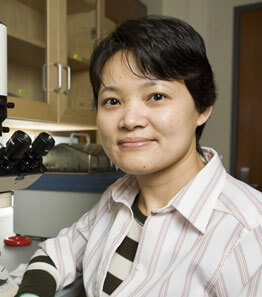 WASHINGTON – Scientists, ethicists and church leaders hailed as a breakthrough two studies showing that human skin cells can be reprogrammed to work as effectively as embryonic stem cells, thus negating the need to destroy embryos in the name of science.

Separate studies from teams led by Shinya Yamanaka of Kyoto University in Japan and Junying Yu and James Thomson of the University of Wisconsin-Madison were published online Nov. 20 by the journals Cell and Science, respectively.

“The methods outlined in these papers fully conform to what we have hoped to see for some time,” said a statement from the National Catholic Bioethics Center in Philadelphia.

“Such strategies should continue to be pursued and strongly promoted, as they should help to steer the entire field of stem-cell research in a more explicitly ethical direction by circumventing the moral quagmire associated with destroying human embryos,” it added.

By adding four genes to the skin cells, the scientists were able to create stem cells that genetically match the donor and have the ability to become any of the 220 types of cells in the human body.

Cardinal Justin Rigali of Philadelphia, chairman of the U.S. bishops’ Committee on Pro-Life Activities, welcomed the news, expressing gratitude “for scientists who took up the challenge of finding morally acceptable ways to pursue stem-cell research, and for government leaders who have encouraged and funded such avenues.”

The new technology “avoids the many ethical land mines associated with embryonic stem-cell research: It does not clone or destroy human embryos, does not harm or exploit women for their eggs, and does not blur the line between human beings and other species through desperate efforts to make human embryos using animal eggs,” he added.

“The president believes medical problems can be solved without compromising either the high aims of science or the sanctity of human life,” said press secretary Dana Perino. “We will continue to encourage scientists to expand the frontiers of stem-cell research and continue to advance the understanding of human biology in an ethically responsible way.”

Australian Archbishop Philip Wilson of Adelaide, president of the Australian Catholic Bishops’ Conference, said, “While it is still early days for this research, it is a very promising discovery which will help scientists to fight serious diseases without resorting to the deliberate destruction of human embryos to obtain stem cells.”

He expressed regret that the Australian Parliament had acted to permit embryonic stem-cell research when more effective and more ethical means were just around the corner.

In Great Britain, the head of the pro-life group Society for the Protection of Unborn Children said the new stem-cell studies “show that one can be both pro-life and pro-science.”

“Experimenting with embryos, on the other hand, is both bad ethics and bad science,” said Anthony Ozimic. “Science advances when it respects human life, but stalls or even goes backwards when it treats human beings as mere research material.”

Ian Wilmut, the Scottish scientist who created Dolly the cloned sheep in 1996, told the London Telegraph that he had decided in light of the new findings to abandon his efforts to clone human embryos and would instead concentrate on research involving the new reprogramming techniques.
Archbishop Mario Conti of Glasgow, Scotland, chairman of the United Kingdom and Ireland Joint Bishops’ Bioethics Committee, welcomed Wilmut’s announcement, saying: “The Catholic Church has constantly supported the work of scientists who use adult stem cells, research which has produced much more promising results and avoids the ethical dilemma involved in creating and destroying human life.”

The National Catholic Bioethics Center said Wilmut’s change of heart “flowed largely from practical considerations” but that the scientist also had acknowledged that the new approach was “easier to accept socially.”

However, Thomson and the International Society for Stem-Cell Research called on scientists to continue research involving the destruction of human embryos. More study is needed to ensure that the newly made cells “do not differ from embryonic stem cells in a clinically significant or unexpected way, so it is hardly time to discontinue embryonic stem-cell research,” Thomson said.

“These findings do not obviate the need for research using human embryonic stem cells,” said the society in a Nov. 20 statement. “Rather, the different avenues of human stem-cell research should be pursued side by side providing complementary information.”

In light of that stand by some scientists, Mailee Smith, staff counsel for the Chicago-based Americans United for Life, said: “The need for states to pass legislation that bans all forms of human cloning remains.”