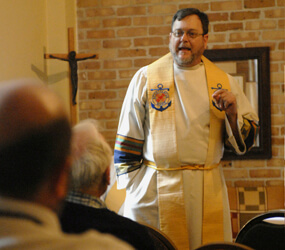 NEW ORLEANS – The rampant piracy in the Gulf of Aden off Somalia’s coast has its roots in the encroachment into fishing zones by large fishing vessels from other countries, but that does not excuse the escalating violence launched by pirates against oceangoing vessels, said a priest who has a ministry to seafarers.

Speaking May 8, he said port chaplains first began hearing reports of piracy in the Gulf of Aden five to seven years ago. Those disputes mostly involved encroachment on fishing territories, but “because no big Western ships were getting hit, it was no big deal,” Father Oubre said.

“It’s good that we are finally paying attention to it,” he said.

European fishing ships went to the coast of Somalia and secured “either very advantageous fishing rights or else there was basically no one able to enforce the fishing zones,” Father Oubre said. “Basically those boats began exploiting the area. At the root of the piracy is the Somali fishermen attacking those boats to defend their area.”

Those disputes escalated to the point where the attacks were staged and coordinated by Somali warlords, “the same warlords that the U.S. Marines and Army fought back in the 1990s,” Father Oubre said.

But this “Robin Hood” motivation “does not justify the piracy,” he added.

The pirates have kidnapped ships’ crews and demanded ransom for their release, calling themselves modern-day Robin Hoods trying to get compensation to replace a dwindling livelihood as fishermen.

The Apostleship of the Sea convention drew a group of 40 port chaplains and priests involved in ministry on cruise ships. The convention approved a message to seafarers that “irrevocably condemns the issue of piracy and prays for all seafarers who face hazardous shipping routes.”

“An important part of our message to seafarers is to not only recognize the challenges, difficulties and hardships they face but also to acknowledge that what they are doing is essential to the quality of our lives,” Father Oubre said. “If the ships don’t sail, the cars don’t drive in Florida and you don’t get your TVs or your computers. It’s mariners who do that service.”

The organization also reaffirmed a resolution it approved in 2008 that the U.S. Conference of Catholic Bishops requires the certification of all port chaplains through a process established by its office.

Filipino sailors, most of them Catholic, make up half of the international crews on the world’s merchant marine ships, Father Oubre said.

After years of intense security at U.S. ports because of the Sept. 11, 2001, terrorist attacks – keeping virtually all foreign seafarers restricted to their ships when they make port – the U.S. Coast Guard is finally telling port facilities to write “a facility plan that must include procedures for coordinating shore leave,” Father Oubre said.

“The frustration for us has been, ‘OK, what is justifying this higher security?’ ” he said. “There’s a strong feeling in AOS that seafarers have been targeted for higher security, with no justification for it. None of the Sept. 11 attackers were seafarers. None of them had merchant marine documents.”

Since 2003, when stricter security rules went into place, a seafarer who signs off a ship to go home “has to be immediately moved from the ship to the airport.” He said the restrictions on foreign crews have persuaded U.S. pilots to avoid shuttling vessels between Europe and North America “because it’s a hassle. You’re not going to get the best guys if they can avoid that situation.”

Father Oubre, a seafarer himself, cobbles together vacation time to spend three weeks to a month on the seas.
“There is hardship and difficulties and dirty work,” he said. “But there’s also the wonders of being blessed by watching the sun come up each day and the glory of the heavens at the end of the day. To watch the flying fish and the porpoises dance as we plow through the water is a blessing.”