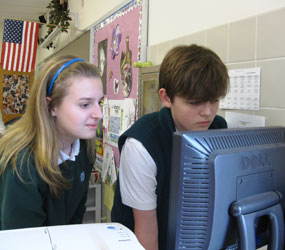 Since its introduction in 1970, Earth Day has aimed to promote environmental awareness and consciousness.

Although global citizens will celebrate the occasion April 22, schools and colleges in the Archdiocese of Baltimore care for the planet beyond 24 hours.

The College of Notre Dame of Maryland in Baltimore announced in March that it is starting a major in Environmental Sustainability in its School of Arts and Sciences in the women’s college. Robert Hoage, a professor, naturalist and environmental educator who has been at the college since 2005, will lead the program.

“Environmental issues and the controversies surrounding them make a direct call to institutions of higher learning to create programs that train and educate students who will make a positive impact locally and universally,” Hoage said in a news release from the college.

The program will study the relationships between environmental concerns and social, political and economic institutions.

According to studies released by the U.S Conference of Mayors and cited by the college, about 10 percent of new job growth over the next 30 years may be related to environmental initiatives. Employment of environmental scientists is expected to increase significantly in the next few years as well.

“Notre Dame’s interdisciplinary environmental sustainability program provides a holistic view of the complex environmental issues we face today and will continue to grapple with,” Hoage said. “Whether in business, government, education or the non-profit sphere, our graduates will be empowered to act as responsible stewards, mindful of Earth’s delicate balance and motivated to seek solutions.”

Younger students are learning the importance of being good stewards as well.

Emmitsburg’s Mother Seton School, a designated Green School, now has a 1.75 kilowatt solar energy system installed by Montgomery County’s Standard Solar. Five solar panels located on the south side of the school’s atrium are visible to anyone visiting Mother Seton.

The system powers Mother Seton’s science lab and is tied to the school’s main electrical panel. The panels are expected to reduce 53 tons of carbon and electric bill costs.

Students can track the solar production throughout the school and see a display indicating the amount of carbon reduced through the innovation. Two small windmills have also been purchased to be part of science classes.