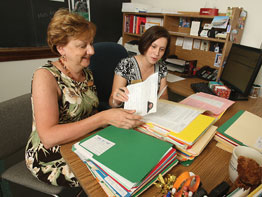 When the Kreiner family was looking for a private high school for their youngest daughter, Kristen, The Catholic High School of Baltimore was their third choice – until they visited the all-girls’ school.

“We felt a warmth there that we didn’t feel at the other schools,” said Kathy Kreiner, Kristen’s mother and a parishioner of St. Joseph in Fullerton.

“The academic program was way up there with the other schools, but the tuition was much more affordable,” said Mrs. Kreiner, who was also impressed by radio and television ads promoting the school.

“Catholic High,” she said, “is our number one choice now.”

A lot of other parents seem to be making the same choice as the Kreiners.

Catholic High’s incoming freshmen stand at 116, a more than 55 percent increase from last year, making them the largest class since 1999.

Next year, total enrollment is projected to be more than 320. That’s at least 38 more students than last year.

“This is a tribute to the administration and the admissions director,” said Dr. Ronald J. Valenti, superintendent of schools for the archdiocese. “They made a concentrated effort to be engaged, to be connected. Kids now feel that they want to go to Catholic High. When you create a great welcoming environment, people want to be a part of that.”

“The biggest factor has been word of mouth,” said Dr. Nazelrod, noting that the school is attracting record number of students for shadow days and open houses. “We have made a lot of significant improvements in recent years, and people are noticing.”

The school boasts a new auditorium, new windows, a new foreign language lab and air conditioning in every classroom.

It has increased the number of advanced placement courses and established partnerships with Neumann College in Aston, Penn., and Anne Arundel Community College. In the fall, Catholic High will launch a science, technology, engineering and mathematics program for young women interested in careers in those fields.

“In recent years, we have attracted more highly academic students, but we also accept those with academic needs,” said Dr. Nazelrod.

Television and radio commercials have helped lift the school’s profile. Although expensive, Dr. Nazelrod said, ads are an important investment in the future.

“With the commercials, we’re just trying to let the community know we’ve been here since 1939 and we intend to be here for many years to come,” she said.

The president credited a strong board of trustees for helping to steer a course for the future. She also praised recent efforts to reach out to graduates. The school has about 9,000 graduates in a recently purchased electronic data system.

Catholic High has intentionally tried to keep its tuition affordable, Dr. Nazelrod said, with about half the student body receiving financial assistance. In the current school year, Catholic High’s tuition was $8,700 – the seventh lowest of the archdiocese’s 22 high schools.

A lot of financial support has bolstered the school in recent years, according to Dr. Nazelrod. Tonie Staudenmaier Wallace, a 1965 alumna, pledged a $1 million donation in 2006. The Franciscan Sisters have also made very large financial contributions, including $1 million in 2006.

Catholic High has placed a renewed focus on its identity as a Franciscan school, increasing the number of Sisters of St. Francis of Philadelphia who serve on staff. There are currently six Franciscan Sisters at the school, and they make up a third of the school board.

“You have to be confident in the quality of your school and strategically work to make it successful,” Dr. Nazelrod said. “You can’t just arbitrarily make decisions. There has to be a strategic plan.”