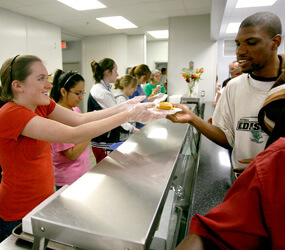 WASHINGTON – Pope Benedict XVI’s new encyclical, “Caritas in Veritate” (“Charity in Truth”), breaks new ground on such topics as microfinancing, intellectual property rights, globalization and the concept of putting one’s wealth at the service of the poor, according to Catholic scholars and church leaders.

In interviews with Catholic News Service and in statements about the encyclical released July 7 at the Vatican, commentators said the more than 30,000-word document takes on a variety of issues not previously addressed in such a comprehensive way.

“I was surprised … at how wide-ranging it is,” said Kirk Hanson, a business ethics professor at Santa Clara University in California and executive director of the Jesuit-run university’s Markkula Center for Applied Ethics. “It’s not just an updating of ‘Populorum Progressio’“ (“The Progress of Peoples”), the 1967 social encyclical by Pope Paul VI, he added.

Hanson said he also was struck by Pope Benedict’s concept of “gratuitousness” or “giftedness,” which reminds people “not to consider wealth ours alone” and asks the wealthy to “be ready to put (their money) in service for the good of others.”

The encyclical is “a plea for the wealthiest on the planet to put their wealth toward the development of peoples,” he said. “In many ways, (Microsoft founder and philanthropist) Bill Gates would be the poster child for this document.”

The Bill & Melinda Gates Foundation has donated billions of dollars for health and development programs worldwide, as well as for education and housing programs in the United States.

Terrence W. Tilley, who chairs the theology department at Jesuit-run Fordham University in New York and is immediate past president of the Catholic Theological Society of America, said one unique aspect of the encyclical is Pope Benedict’s “vision that all flows from the love of God.”

“It’s unusual as a theological reflection on social justice,” he said. “But that’s what holds it all together.”

Tilley said the encyclical makes a “pedagogical attempt to get people out of the mindset that charity is just giving money to those poor people over there.” The pope rejects such a “dismissive attitude,” he said.

The Fordham professor also said he was “delighted to see the strength with which (Pope Benedict) supports labor organizations.” But the pope also stresses “the responsibility of both management … and labor to take care of and be responsible to other than their own constituencies,” he added.

The current president of the Catholic Theological Society of America, Father Bryan N. Massingale, called the encyclical “a welcome contribution to the discussion of how Christians should think and act in a global economy.”

An associate professor of theological ethics at Marquette University in Milwaukee, Father Massingale said the encyclical’s “most challenging insight … is its repeated criticism of the short-term thinking and profit-making that has dominated our financial markets and political discussions on the economy.”

Pope Benedict’s “support for the longer view, as well as for active participation in the political process to ensure that financial markets serve the needs of all, and not simply those with access to wealth, will definitely challenge the usual political discourse in this country, if we have the courage to take his call seriously,” he added.

Father Massingale, a Milwaukee archdiocesan priest, also said that, although the pope’s support for the labor movement “is hardly surprising to those familiar with Catholic social teaching, the force with which Benedict reaffirms the role of labor unions in the pursuit of economic justice is unmistakable.”

John Sweeney, a Catholic who is president of the AFL-CIO, said “Caritas in Veritate” “reaffirms the need for exploited and marginalized workers to have the freedom to come together and form unions to bargain and negotiate for a better life.”

“We stand with the Catholic Church in the belief that when workers can form unions they lift up their communities and nations and create a culture of dignity and respect for all workers,” Sweeney added.

But Father Massingale noted that the encyclical also “calls upon unions to adopt a more international perspective in light of the global mobility of labor” – a call that the theologian said “could spur creative thought in revitalizing movements for worker justice.”

Bishop Michael P. Driscoll of Boise, Idaho, said the encyclical will be particularly helpful in these “difficult times for the poor in Idaho or anywhere around the world.”

“The Holy Father, who has seen the terrible toll these times have taken, has given us a new vision on which to build a just economy, where all can thrive, not merely the rich and powerful,” he said. “We cannot achieve true prosperity unless it is built upon a foundation of justice and care for all, including the poor.”

In a different part of the country, Archbishop Allen H. Vigneron of Detroit said people in southeast Michigan “are living through profound changes in the social and economic fabric of our community.”

“All of us citizens, and especially our leaders, need to make wise and farsighted decisions in order to lay the foundation for the better future we want to hand on to succeeding generations,” he said. “The Holy Father’s new encyclical, as the latest application of the church’s social teaching, offers an important resource for us in the great project we are engaged in.”

Archbishop Donald W. Wuerl of Washington said the encyclical is “very welcome and particularly timely as our political and economic leaders struggle to address the devastating global economic crisis.”

The document also notes that “responsibility does not stop at a nation’s borders nor does it fall solely to political leaders,” the archbishop said. “Universal human truths about human dignity transcend geographic, economic and political boundaries.”

Cardinal Francis E. George of Chicago, president of the U.S. Conference of Catholic Bishops, said the encyclical provides helpful guidance for finding answers to the social, economic and moral questions of the contemporary world in a search for truth.

The document offers sound reflections on the vocation of human development as well as on the moral principles on which a global economy must be based, he added.