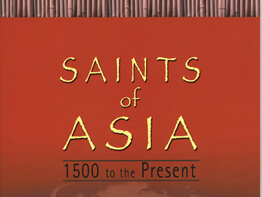 Not long before he was to be ordained a Jesuit priest in 16th century Japan, St. Paul Miki was captured and forced to march with his companions more than 1,000 miles as part of a national persecution of Christians.

Sentenced to die by crucifixion, the young man was said to have described the cross as “the noblest pulpit” he ever filled. While hanging on a cross on Nagasaki Hill, the saint was heard forgiving the emperor – begging the Japanese leader and his executioners to “seek baptism and be Christians themselves.”

“There is no way to be saved except the Christian way,” St. Paul Miki boldly proclaimed before being silenced when soldiers thrust a lance into his heart.
The heroic martyrdom of St. Paul Miki is just one of many stories of bravery and faith recounted in “Saints of Asia, 1500 to the Present,” a new book by Father Vincent J. O’Malley, C.M.

Published by Our Sunday Visitor, the 220-page reference book is the fifth book on saints written by the Vincentian pastor of St. Joseph in Emmitsburg. It is the culmination of three years of research.

“What most impressed me are those saints who are renown for their courage in venturing into new geographical territories and new cultural and spiritual territories,” said Father O’Malley, who visited many shrines, museums, religious communities and diocesan offices across Asia while researching the book.

For all the canonized saints who were martyred, there are tens of thousands of Catholics who have never been canonized who also died for their faith in Asia, Father O’Malley said.

“They died without rancor,” he said. “They suffered very ritualistic torture and they accepted it and died forgiving their persecutors.”

Father O’Malley said he was happy to discover that many Asian saints, especially missionaries, made attempts to incorporate elements of Asian culture in Christianity. St. Matteo Ricci, for example, shared Western learning with the Chinese and was received as a “revered elder,” Father O’Malley said. The Jesuit priest translated the Ten Commandments into Chinese and wrote a catechism in the language, the author said.

The pastor said it was very difficult for the church to make inroads in Asia because sophisticated religions like Confucianism, Buddhism and Shintoism preceded Christianity by many hundreds of years. Today, only 3 percent of Asia is Catholic, Father O’Malley said.

“Saints of Asia” includes biographies of canonized saints and those candidates who are being considered for canonization by the Holy See. The profiles are arranged chronologically by feast day and include representatives from 21 countries.