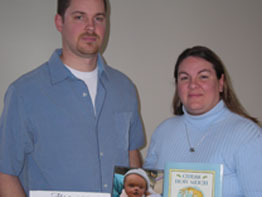 EMMITSBURG – Even before their son was born, Robert and Joanne Berg read to him every night. Sitting side-by-side, the husband and wife took turns tenderly poring over passages from two books about the love between a family and a child: “Guess How Much I Love You” by Sam McBratney and “Just in Case you ever Wonder” by Max Lucado.

If anyone needed love, it was Robbie.

The unborn baby was suffering from a variety of major health problems including fluid on the brain, a congenital heart defect and abdominal problems. Although a few people suggested the Bergs consider terminating the pregnancy, the parishioners of St. Joseph in Emmitsburg saw their son as a gift from God. They were determined to respect the sanctity of his life, they said, no matter how short or difficult it might be.

Robbie was born Dec. 4, 2006, at The Johns Hopkins Hospital in Baltimore, kicking and crying and weighing 6 pounds, 2 ounces – but with a lot more health problems than doctors had predicted. He was missing a kidney, and the remaining kidney was much smaller than it should have been. His chest cavity and ribcage did not form properly, which meant that his lungs would never develop normally.

Hours after the delivery, doctors grimly told the Bergs their first-born child would not survive. With the whole Berg family crowded into the neonatal intensive care unit, Father Paul Sparklin, Catholic chaplain at The Johns Hopkins Hospital in Baltimore, dripped holy water over the baby’s head – baptizing him in the name of the Father, and of the Son and of the Holy Spirit.

Later, the Bergs held their baby in their arms, prayed with him and read him the same books they had read to him so many times before. Only 13 hours and 26 minutes after he was born, Robbie died surrounded by love.

“We were able to hold him while he was still physically with us as God took him into heaven,” said Mrs. Berg. “I think we were able to prepare him for his trip to heaven.”

Sitting in their Emmitsburg home where photos of their baby are prominently displayed, Mr. and Mrs. Berg, both in their mid-30s, said they believe Robbie was sent to them so they could help other families who are dealing with difficult pregnancies.

The Bergs have established a non-profit organization called Little Robbie’s Angels Foundation, which provides inspirational children’s books for parents who are dealing with difficult prenatal diagnosis pregnancies. By reading to their unborn children, the Bergs hope other parents will find strength like they did and feel a closer connection with their child.

Researchers have shown that unborn children can hear voices outside the womb at about 18 weeks into a pregnancy, Mrs. Berg said.

“We look at Robbie’s life as a gift and not something we lost,” said Mrs. Berg, smiling at the sight of a photo showing her son’s button nose that looks just like his dad’s. “Our hope is to make it easier for families to accept their difficult circumstances.”

When they were first faced with Robbie’s prenatal diagnosis, Mrs. Berg remembered thinking there was no way she could handle it. But the experience drew her closer to her husband, she said. They supported one another.

“You can get through it,” she said. “Listen to your heart. It can be hard when others are suggesting the worst.”

Mrs. Berg urged those thinking about abortion to remember that adoption is always an option – even for babies with physical challenges.

“I would hope they would consider that first,” she said.

Neither of the Bergs considered abortion, they said.

“I couldn’t imagine never getting the chance to meet my son in person,” said Mr. Berg. His wife added that God must have a special job for their son if he wanted him in heaven rather than spending more time on Earth.

“We are so proud of our little boy,” she said.