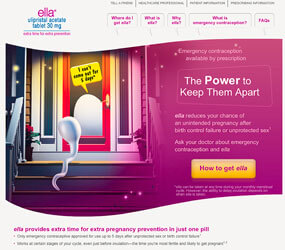 WASHINGTON – In marketing materials for ella, the emergency contraception pill that will be available without co-pay or deductible to American women of child-bearing age under the new health reform plan, a cartoon character egg peeks out from behind a glass door while a cartoon character sperm stands on the steps, apparently cajoling her to come outside.

“I can’t come out for five days,” the egg tells the sperm. The ad goes on to tout the drug’s “power to help keep these two apart” and says ella, known generically as ulipristal acetate, “provides extra time for extra pregnancy prevention.”

But that’s not all it does. “Ella may also work by preventing attachment to the uterus,” say the materials distributed by Watson Pharma Inc. of Morristown, N.J., which sells ella.

It is that effect of preventing the fertilized egg from attaching to the uterine wall that can make ella an abortifacient and has led the U.S. Catholic bishops and others to criticize the Department of Health and Human Services’ decision to include it among the preventive services for women that nearly every health plan in the United States will be required to cover.

“No emergency contraception would work very well if it only worked to prevent ovulation,” said Dr. Kathleen Raviele, a gynecologist in private practice in the Atlanta area. “It has to have other effects.”

Like the abortion pill RU-486, ella operates as a progesterone antagonist. A rise in a woman’s levels of the hormone progesterone, called an LH surge, is necessary before ovulation – the release of the woman’s egg – can occur, but ella keeps the levels down to prevent ovulation.

Because progesterone also plays an essential role in maintaining a pregnancy, ella can have “an adverse effect on the embryo as it tries to implant or after it has implanted,” said Raviele, a past president of the Catholic Medical Association who serves on the board of the American Association of Pro-Life Obstetricians & Gynecologists.

She likened the process to a car that “might look pretty sitting in your driveway, but isn’t going anywhere without the key.” In her analogy, progesterone is the key that is needed for ovulation, but a drug like ella “keeps you from putting the key in the ignition,” Raviele said.

And if ovulation has already occurred before the drug is taken and the fertilized egg is already traveling down the fallopian tubes or has already reached the uterus, it’s as if the car has started and “you can take it wherever you want to go” but then the electrical system fails, she said.

“The car comes to a halt,” just like ella “makes the process of ovulation to implantation come to a halt” by making the lining of the uterus a hostile environment for a pregnancy.

The American Congress of Obstetricians and Gynecologists says an abortion occurs “when the fetus is expelled from a woman’s uterus.” It defines a fetus as “the developing offspring in the uterus from the ninth week of pregnancy until the end of pregnancy” and says the earlier, embryonic stage of life goes “from the time it implants in the uterus up to eight completed weeks of pregnancy.”

But Richard Doerflinger, associate director of the U.S. bishops’ Secretariat for Pro-Life Activities, noted that the “Ethical and Religious Directives for Catholic Health Care Services” state that abortion includes “the interval between conception and implantation of the embryo” so a drug is an abortifacient “even if it only interferes with the embryo’s survival prior to the completion of implantation.”

He said some have accused the bishops of exaggerating ella’s effects or using “scare tactics” against it. But “sometimes it is reality itself that is scary,” he said.

“To be quite frank, the fact that this drug can work up to and after the usual time of implantation is not seen as a disadvantage but as a benefit by those who are promoting the drug, whose only goal is maximum effectiveness in countering unintended pregnancy,” Doerflinger said.

“Of course this mandated coverage, and accepted rules of medical privacy, will also mean that the minor daughters of almost all Americans with health insurance (including millions of Catholic parents) will also have confidential access to this abortifacient drug without their parents’ knowledge,” he added.

Raviele said a study published last year in the journal Human Reproduction indicated that the arthritis drug Mobic – a COX-2 inhibitor known generically as meloxicam – could be an effective and morally acceptable form of emergency contraception for use in Catholic hospitals in cases of rape.

The study found “that at doses of 30 mg/day for five days during the woman’s fertile period, 90.9 percent of women failed to ovulate and there was no effect on LH, progesterone, estradiol levels or cycle length,” she said. “A nonhormonal drug such as this which targets only ovulation would be a morally acceptable contraceptive in cases of rape.”

Although Mobic has not been approved by the Food and Drug Administration for the use suggested in the study, Raviele said such off-label prescribing is not unusual.

“In medicine we use drugs all the time that are used for other purposes,” she said.