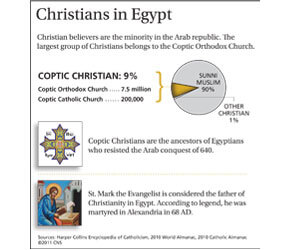 WASHINGTON – The primary concern in Cairo is to fix the constitution and meet the needs of the Egyptian people, said Father Beshoi Anis, pastor of Holy Family Coptic Catholic Church in Toronto.

“The U.S. and Egypt are friends and they should pay attention to the demands of the people and what they require,” the priest said.

Although they are half a world away, members of Coptic Catholic and Orthodox parishes in North America turned their attention to Egypt as civil unrest that sparked in late January continued.

Tens of thousands of Egyptians were protesting in the streets of Cairo, calling for President Hosni Mubarak’s immediate resignation and demanding political and economic reforms.

Egypt is home to a Coptic Christian population estimated at about 10 percent of the Egyptian population. Of that number, about 90 percent are Coptic Orthodox, with most of the remainder Coptic Catholic.

Most Coptic Catholics are concentrated in Upper Egypt, although in recent decades some have migrated to other parts of the country and other nations, including the United States and Canada.

Father Anis had a worried yet hopeful insight into the unrest plaguing Egypt.

He stressed in a phone interview with Catholic News Service Feb. 2 that he does not speak for the church but that he personally believes Christians and Muslims are brothers who will come together to rescue Egypt.

He said he hopes citizens will give the authorities a chance to rebuild the confidence of the people.

Father Anis and the 100 families in his congregation all have relatives throughout the country. He moved from Egypt eight years ago but still has family there, including a brother and sister from Assiut, in Upper Egypt. Currently, his family home was not in danger, but he expressed apprehension, especially with certain communication lines being disabled.

“We are concerned and worried and we call to see how they are doing through landline because the Internet was shut down,” he said. Government authorities have since restored Internet service.

Father Francis Rahim, the pastor of St. Mary’s, who has family in Alexandria, said Feb. 2 he hoped the violence would end that day or the next, but he feared Christians might lose hope.

“How can we help?” Father Rahim said. “We pray and that is it. We do not know, maybe Egypt will in a week or two be like Iraq.”

The priest added that every time there is unrest, it always affects the Christian churches, but he said it was not the time for Christians to leave Egypt. “Where will Christians go? It is a big problem,” he added.

A U.S. Coptic Orthodox pastor, Father Marcos Ghali, told CNS in a Feb. 1 e-mail: “As a religious minority in Egypt, and also as immigrants living in the U.S., we support the will of the people and their desire for a much desired and long overdue change. We are with peaceful protests.”

“Egypt is our home and country, and we pray for peace and wisdom for the leaders and we call on them to listen to the young men and women on the street who are the future of this country,” said Father Ghali, pastor of St. Mark in Cleveland. “The church’s biblical role has been always to pray for unity and peace of the country and we continue to do the same in this difficult time.”