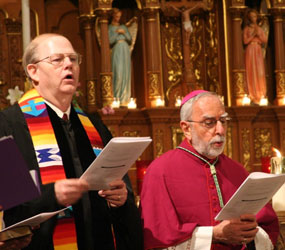 PHOENIX – Ecumenical leaders at the annual National Workshop on Christian Unity were encouraged to work together on social justice issues, particularly immigration.

Although theological differences keep Christian churches apart in some ways, “we’re united around what’s becoming one of the central ethical concerns in this country – just immigration,” said the Rev. Clifton Kirkpatrick, president of the World Alliance of Reformed Churches, at the April 27-30 workshop in Phoenix.

Two sessions of the gathering dealt with immigration.

Catholic Bishop Gerald F. Kicanas of Tucson, Ariz., and Phoenix-based Bishop Minerva Carcano, who heads the Desert Southwest Conference of the United Methodist Church, provided perspectives as leaders of their churches in a state with dramatic immigration flows and problems.

“One of the most painful things about our state is the deaths in the desert, which continue,” said Bishop Kicanas. He also said he sees growing hostility toward undocumented immigrants.

The problems that start with a “broken system of laws” extend to religious communities where the leadership is on one page and their people are on another, he said.

“We’re not a nation that allows laws to be disregarded, so the challenge for us is to come up with comprehensive immigration policy,” said Bishop Kicanas.

Bishop Carcano described immigration more personally, explaining that she’d found insight from a mother’s perspective. She recounted stories from immigrants she’d met on the border and said Christians have to lead on a moral level.

Other sessions at the workshop looked at racism, the place of Mormons in the ecumenical movement and Muslim-Christian relations.

In his keynote address, Greek Orthodox Metropolitan Gerasimos of San Francisco noted that not all Christians celebrate Easter on the same day. He suggested a good ecumenical step would be to address this difference.

“Listen to one another,” the metropolitan said during the keynote address. “We are to be so committed to the relationships we have that we can sit in silence for a while and just be comfortable sitting together.”

The National Workshop on Christian Unity, a yearly ecumenical effort that began in 1964 under Catholic leadership, works toward Christian unity.

“For those of us who live in the desert, we have an appreciation for the need to water any living thing in order to have fruit,” said Father Michael Diskin, director of the Office of Ecumenism and Interreligious Affairs for the Diocese of Phoenix.

The theme of this year’s workshop was “Desert Pilgrimage.”

“If we acknowledge that all Christians are truly meant to be one, then there’s an obligation that we all share to nurture that ongoing effort,” he said.

Phoenix Bishop Thomas J. Olmsted, a member of the U.S. bishops’ Committee on Ecumenical and Interreligious Affairs and a dialogue partner on a joint committee with Orthodox churches, opened and closed the worship ceremony April 27 at St. Mary’s Basilica.

“I trust that as we praise him together that he will bless our time together,” the bishop said in the opening worship ceremony April 27 at St. Mary’s Basilica. “And that he will deepen our longing to be one in word and deed with the prayer that Jesus offered at the Last Supper, ‘that they all may be one.’”

That was the hope of the Rev. Jan Olav Flaaten of Trinity Lutheran Church who was instrumental in bringing the workshop to Phoenix.

“We have a good ecumenical spirit among the leadership in Arizona,” he said. “We’re concerned about ways that we can pray and think and talk together in a constructive and helpful way.”