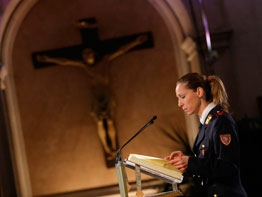 VATICAN CITY – The Bible unites Christians, calls them to task for the divisions they have allowed to endure and urges them to reach out to the world’s poor and suffering, said ecumenical delegates to the world Synod of Bishops.

Many Catholic members of the synod speaking Oct. 7-9 praised Protestant groups for their work in distributing Bibles and expressed admiration for the centrality their churches give to the word of God.

At the same time, the first three ecumenical delegates to address the synod expressed hope that as Catholics focus more on the Bible, the Christian churches would draw closer together in faith and in action.

U.S. Cardinal William J. Levada, prefect of the Congregation for the Doctrine of the Faith, told the synod Oct. 8 that a close relationship exists between the Scriptures and ecumenism.

“The Bible is truly a terrain for unity,” he said.

However, the cardinal said, “one cannot ignore the historical fact that is at the root of the division between Christians: the controversial interpretation of certain important fundamental biblical texts,” including over the identity of Christ, the means of salvation and the role of the church in interpreting Scripture.

Cardinal Levada asked synod members to keep the ecumenical importance of the synod’s theme in mind as they discuss and deliberate because “the attention given to the written word of God is certainly a very strong bond that draws the Catholic Church closer to the other confessions.”

In an Oct. 7 message to the synod, the Rev. Samuel Kobia, general secretary of the World Council of Churches and a Methodist minister from Kenya, said that Jesus’ prayer in the Gospel of St. John that his disciples would be one shows that “the search for the visible unity of the church is an indispensable dimension of the life and mission of the church.”

The message, read by Romanian Orthodox Metropolitan Nifon of Targoviste, the WCC representative at the synod, also said the synod’s focus held a promise for the renewal of the entire Christian church.

“How the word of God resonates in our lives, transforms us and motivates deeds of love among us is indeed central for the holistic mission of the church,” Rev. Kobia wrote.

He said the world, “torn apart by conflict and war, divided between rich and poor and haunted by communal hatred and violence,” desperately needs the united witness of Christians who love one another.

The Rev. Robert K. Welsh, the U.S.-based president of the Disciples of Christ’s council on Christian unity, told the synod Oct. 9 that “Christian unity stands at the heart of the Gospel’s message; division within the body of Christ is a scandal before God and before the world.”

Like the other ecumenical delegates, retired Lutheran Bishop Gunnar Stalsett of Oslo, Norway, the representative of the Lutheran World Federation, said the synod topic “is truly ecumenical, it impacts all religions and has a message for the world.”

He told synod members, “All three ‘religions of the book’ – Judaism, Christianity and Islam – are today in a squeeze between secularism and fundamentalism.”

If people truly believe religious freedom is a basic human right, “this implies that there must be room in society for fundamentalist expressions of faith, even when this leads to sectarianism and division,” he said.

The role of religious leaders, he said, is to counter fundamentalism with education in the genuine interpretation of Scripture and to ensure people understand that “terrorism in the name of God is an affront to all faiths as it is a violence against God.”