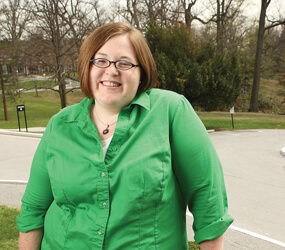 When the economy had some college seniors worrying about finding jobs after graduation, Cassandra Bales remained calm.

After all, she had a plan.

“I’d already decided that I wanted to go to graduate school. I hope to work for the government, probably in the national security area. I knew that if I wanted a good job, I would at least need my master’s,” said the 24-year-old senior at College of Notre Dame of Maryland. “The state of the economy kind of validated my decision.”

Ms. Bales has been accepted into the spacecraft and national security program at the Institute for World Politics in Washington, D.C., but the Noblesville, Ind., native is deferring for a year to gain some international experience.

In August, the international relations major will travel to Indonesia to teach English as part of a Fulbright English teaching assistantship. She will spend approximately 10 months in the Asian country before returning to the U.S. to begin graduate studies.

As the school year comes to a close, many graduating seniors are facing important decisions when it comes to going to graduate school versus getting a job.

Lakeisha Moore-Mathews, assistant director of the Career Center at Loyola College in Maryland, said that articles that have come from the National Association of Colleges and Employers and other newsletters have been saying that some people may decide to go back to graduate school and ride out the recession. However, she said that is not necessarily the case with Loyola students.

“More of them want to find jobs, see if they can find something before they make that decision,” she said. “I don’t think that there’s a great fear of, oh I just have to go to grad school. I think people are saying, you know I’ll find something and then depending on what happens there, maybe I’ll have to take a new direction.”

That was the case for 22-year-old Regina Atwood.

The College of Notre Dame senior had planned to pursue a master’s degree, but she decided against doing so right away. The Silver Spring native said she needs to save money first.

“You have all these grand aspirations for yourself. Then you look at it and you’re just like, ‘I’ve maxed out all my loans, my parents can’t help me anymore, and I am facing massive debt in a time when I might not get a job for two years.’ So it does affect your plans,” she said. “I think so many of us are facing this brick wall.”

After her May graduation, Ms. Atwood will work at Camp Wellspring, a weight-loss camp for girls and young women ages 12-25. It will be her third summer at the camp in upstate New York, her second as an employee.

“I just wanted to go up there and see what it was all about,” she said of her first summer at the camp. “Then I ended up working there, and I love it.”

Ms. Atwood hopes the camp job will lead to a more permanent position at the company’s California school, which offers teens a chance to improve their grades while learning healthy habits. She said she plans to go to graduate school later on.

Employers who have spoken to students through the Career Center’s workshops at Loyola have offered some hope for graduating seniors and all those looking for a job, according to Ms. Moore-Mathews.

Although the employers said it may take more time and people may have to be more aggressive in how they find a job, all is not lost.

“The good news that we’re trying to get out is that there are jobs out there,” she said. “You just need to be connected and figure out where they are.”