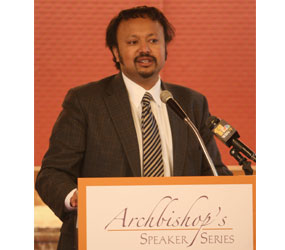 Each year, Catholic schools in the Archdiocese of Baltimore save Maryland taxpayers more than $380 million in per pupil expenses and provide an additional $393.3 million to the local economy in income and revenue.

That was the message of Sage Policy Group CEO Anirban Basu, during the Archbishop’s Speaker Series Jan. 13 at the Center Club inside the former Baltimore City home of Legg Mason. The lecture, called “Catholic Education: Why It Should Matter to the Baltimore Business Community,” was delivered to business and community leaders and was the first in the Archbishop’s Speaker Series.

Basu, a member of the newly formed Archdiocesan School Board, prepared an independent study last year that analyzed the economic impact of Catholic schools.

“This is a really a period of re-birth for the archdiocese’s school system,” Basu said.

The study came as the archdiocese was addressing declining enrollment last year.

“Catholic school graduates can expect to earn roughly $225,000 (in 2008 dollars) more than their public school counterparts,” over their earning careers, Basu said.

“I don’t think that is an accident,” Basu said.

As the archbishop concluded the program, he reminded the community and business leaders of the transforming landscape of Catholic education. He talked about longtime dedication of the clergy and religious to schools.